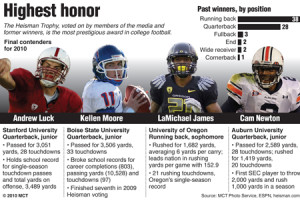 Profiles of the final contenders for the 2010 Heisman trophy, and chart showing previous Heisman winners by position. The Heisman, voted on by media members and former winners, is college football's most prestigious award. MCT 2010