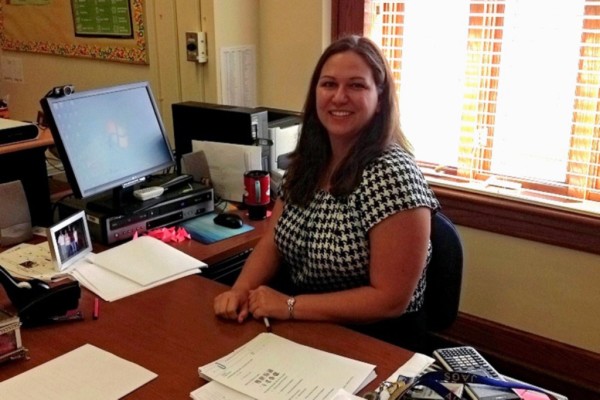 The sunshine from her window reflects Mrs. Dubee's happiness to be teaching here at Academy

Academy knew they would have a challenge replacing the much-respected math teacher Mrs. Deb Collins, when she took on the Instructional Technology Specialist position.  Her replacement, Mrs. Megan Dubee, has stepped right in without a snag, teaching Algebra I College Prep, Honors, and Geometry.

A Gator graduate of the University of Florida, Mrs. Dubee received her bachelors in psychology and her masters in math education. She previously taught at Ursaline Academy in New Orleans, founded in 1727 and the first all-girls school in the country.  This experience helped make Mrs. Dubee feel at home here at Academy, another girls school that represents the oldest girls school in Florida.

Mrs. Dubee said, “Like Academy, Ursaline Academy is filled with spirited young ladies with dazzling smiles who strive to become the best they can.”  Similar to Academy,  Ursaline Academy pushes students to reach their full potential while letting them embrace their sisterhood at the same time.

Ursaline students wear uniforms also,  but they are quite different, Mrs. Dubee pointed out. She says that they wear skirts with uncomfortable shoes. Polo shirts are a senior privilege only. Mrs. Dubee said Academy girls have the privilege of drinking water in class and eating food at break. She remembers that at Ursaline Academy, food and drink could only be consumed in the cafeteria.  Although she did enjoy New Orleans, Mrs. Dubee says that she prefers the Florida atmosphere and is happy to be back at home.

Mrs. Dubee says that she always loved math over all the other subjects in school, but she did not think she would one day teach it. “I did not believe I would be teaching math until I started teaching.”

She loves being around Academy students and teaches math as if it were second nature.   She especially enjoys her view of the bay from her classroom window and says she has seen dolphins out toward Davis Island. The classroom’s large window illuminates Mrs. Dubee’s room in bright sunshine, reflecting her joy to be teaching here at Academy.