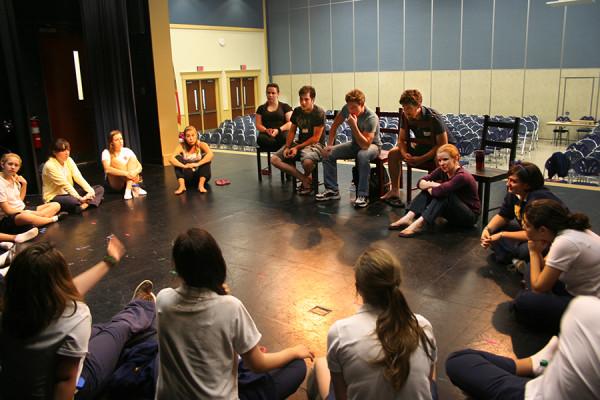 “Two households, both alike in dignity, in fair Verona where we lay our scene,” began the adaption of Shakespeare’s famous play Romeo and Juliet by the FSU/Asolo Conservatory. This year’s performance marks Asolo’s fourth appearance at Academy. Starting back in 2010, they have performed the Greek tragedy Antigone, followed by the Shakespeare classics Hamlet Redux, and Macbeth. Judging by the reactions from the audience, it was obvious that the student body enjoyed the play immensely.

With a small cast of five people, the numerous roles were divided between cast members. For example, Moldovanski played Mercutio, Friar Laurence, Montague, and the Apothecary. No part went unnoticed or unappreciated Monday. Laughter, tears and choruses of, “aww,”  rang throughout the auditorium. Senior Gabrielle Madden shared that this year’s performance was, “the best one yet.”

“The Asolo Theatre is always an amazing experience, [but] Romeo and Juliet was extremely understandable and fun.”

After the performance, the actors stayed for almost an hour to talk to AHN’s cast of “Miss Beth”, giving helpful advice to the high school actresses.  The ‘Montague’ team gave advice about how to warm up, get into character, follow your dreams no matter what people say, and what to expect career wise.

Revealed to Academy’s theatre troupe were strong pieces of encouragement that even though every production has roles with few lines, “(An actor has) more freedom with the smaller parts. [They can] invent their own world”.

Lavely added on to the concept of small roles, “[The role] wouldn’t be written into the play if they weren’t important.”

Whitehead, who played the Nurse and Tybalt, told the group that, “Everything is valuable, because you have no idea how everything can come back (into acting).”  They gave examples of how anything and everything: math class, a job, or a failed relationship, turns into an experience  your character can use to portray a certain emotion or be a certain person.

Along with the great advice the actors also spoke about never giving up on your dreams, no matter what people say. Moldovanski spoke about going into a competitive profession such as acting, “If you choose to be an actor there will be a lot of people who tell you it’s not easy or a good decision. They do it out of love, but they don’t understand the need to perform.”

They all spoke about what inspired them to become actors, and just speaking about acting in general, “you could truly see the passion they spoke about in their performance” as Gabrielle observed.