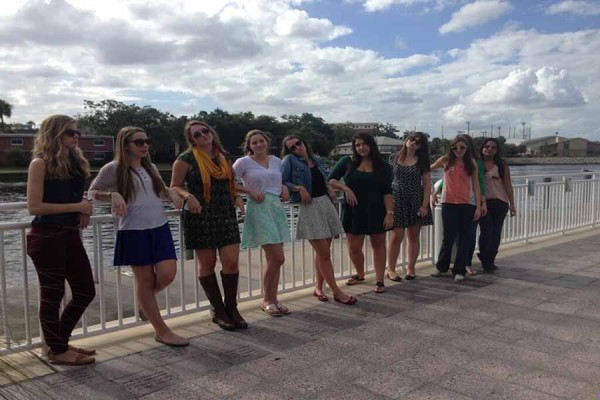 If you saw students dressed in sheets in the halls this past Wednesday, don’t worry. It was not a toga party. The AP Art History students were dressed as pilgrims journeying to holy sites. Long before the Mayflower arrived at Plymouth, the term pilgrim was used to describe any person traveling to fulfill spiritual needs. They often wore robes, heavy jackets, galoshes, and large hats to protect themselves from the sun.

Pilgrimages were common among many religions, most notably in the Christianity, Islam, Judaism, and Buddhism religions. Christians most often traveled to churches of basilicas containing relics, the remains of dead saints. Buddhist pilgrims flocked to the Great Stupa, a popluar temple destination that also houses relics.  Jerusalem is a common pilgrimage site for both Jews and Muslims, as the city is sacred to the history of their religion. Muslims also often visit the City of Mecca, the holy city that contains the Kaaba, the most sacred site in Islam.

The APAH students took a pilgrimage themselves, on Friday, November 22, to Sacred Heart and the Museum of Tampa.

Their day kicked off with a visit to Sacred Heart Church to examine the architecture. Amongst the modern buildings that make up most of downtown, the church’s gothic architecture stood out and immediately grabbed their attention. The building’s initial imposing exterior was contrasted with its elegant interior. Stained glass windows and a clerestory window beautifully illuminated the inside. Columns with palm tree capitals and religious statues filled the church.

Art history student Khalei McKown paused to take in all of the beautiful sites the church had to offer. “My favorite part was the altar, and I liked the tile floor.”

After visiting Sacred Heart, the girls took a stroll through the downtown area. They eventually ended up at Indigo Coffee, where they chatted and worked on their Art History study guides. Then, it was off to the Tampa Museum of Art.

Upon arrival, the students eagerly viewed the artwork that filled the exhibits. Two galleries in particular stood out to the girls. The Arp, Calder, and Miró: Modern Masters from the Albright-Knox Art Gallery was a modern art exhibit that illustrated the artists’ interests in both art and science. One of its notable pieces, “The Cone”, has the distinction of being the first mobile art work. The Fragile Waters exhibit featured photographs by environmental photographers Ansel Adams, Ernest H. Brooks II, and Dorothy Kerper Monnelly. Their work combined the photographers’ beautiful photography with the environmental message of conserving water and respecting the Earth’s resources.

After viewing the galleries, the girls ate lunch at Sono Café.  They discussed the artwork they had seen and what they had learned over salads and sandwiches.

Carmen Mendez marveled over the modern art exhibit and looks forward to learning about that style in APAH. “I liked seeing the exhibits with Modern Art. We haven’t gotten to that style yet in class and it was a nice preview of what to expect.”

Students, like senior Gini Barreda, greatly enjoyed this trip, as it allowed her to use the information that was learned in class in a real-world setting.

“I really enjoyed myself during the field trip. It was a nice break from school before the actual Thanksgiving break. But more importantly, the trip to Sacred Heart was a way to bring what we have already learned inside the classroom and apply it to real life architecture.”