Jagball 2014: May the odds be ever in your favor 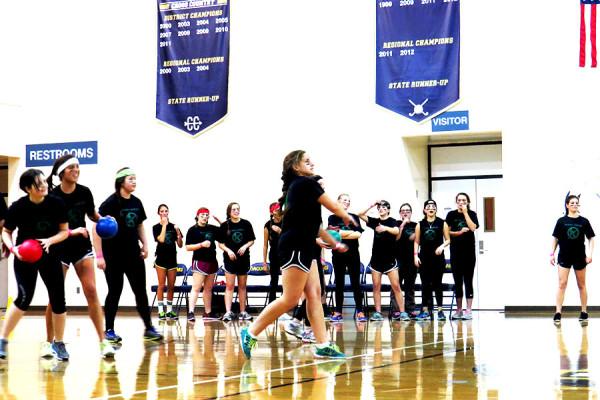 Junior Sarah Castillo trying to defend her District at this year's Jagball.

Jagball 2014 put our Academy ladies to the test on Thursday, January 30. All grade levels competed to capture the title of Jagball Champions. With the theme based around the popular novel The Hunger Games, students were assigned to the Districts that corresponded with their grade level. The infamous Capitol was represented by the teachers.

As an event associated with Spirit Week, Jagball keeps the competition alive between the grade levels. Each grade competed against one another in the hopes of being the last grade standing. The stakes were high because the winning grade received Spirit Week points towards for their total score, which was calculated at Friday’s pep rally.

The games started with the battle of Districts Nine and Eleven, with the juniors coming out on top. Next, Districts Ten and Twelve competed against each other and the seniors walked away as the champions.

During halftime, the audience was blown away by a performance from the AHN Jaguarettes Dance Team.

After the grades competed against one another, it was time to pick the best players, “the all-stars”, from each grade to battle against the teachers. The crowd eagerly awaited the arrival of the teachers and were happily surprised by their ‘Capitol’ look.

“The teachers took me by surprise, but it was great to see them in their crazy hairstyles and makeup. They took the Capitol look to the next level,” stated senior Natalie Navarro.

Despite their fierce look, the Capitol was no match for our District’s tributes. The all-stars were victorious.

Finally, it came down to the last battle between Districts Eleven and Twelve. After both teams huddled together and discussed their plan of attack, they competed. With balls flying every which way, this game proved to be one of the most intense in Jagball history. Once again, the seniors prevailed and defeated their competition.

At the end of the night, the girls put aside their game faces and circled around the gym to sing Academy’s Alma Mater.

“It was great to see everyone come together, especially when we all ran to the middle of the gym at the end of the Alma Mater. I’m so sad that this is my last Jagball, but so happy I was able to participate in it for the past four years,” senior Hannah McCarthy exclaimed.

This year’s Jagball proved to be one of the best in Academy’s history. The night was filled with friendly competition and unity that strengthened our sisterhood.