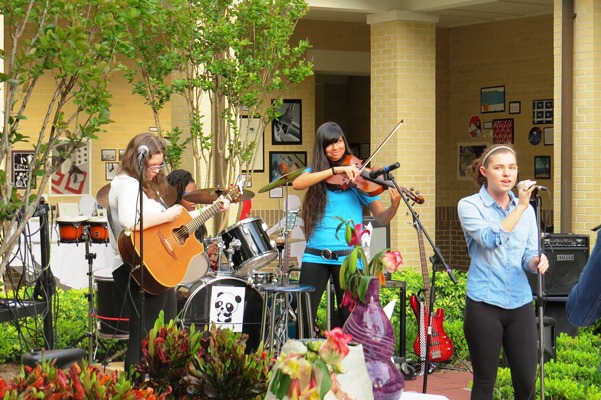 With human trafficking such a prevalent issue in Florida, especially in Tampa, it was fitting to center this year’s arts fest on this subject. With the campus courtyard decorated in black, white, and red human cut outs holding hands, the AHN artists made the entire school aware of its tyranny.

Human trafficking is a type of modern day slavery that can be happening right next door without being detected. Victim’s voices are silenced as their rights and dignity are stripped away. The Tampa Bay Advocates Against Human Trafficking define the issue as, “The recruitment, transportation, transfer, harboring or receipt of persons: by the threat or use of kidnapping, force, fraud, deception or coercion, or by the giving or receiving of unlawful payments or benefits to achieve the consent of a person having control over another person, and for the purpose of sexual exploitation or forced labor.” this problem can be divided into smaller categories such as sex trafficking and, labor trafficking, but both are unjust just the same. According to these advocates, “Florida is currently ranked number three following California and Texas in human trafficking activity,” and, “The Tampa Bay area is currently ranked number two in the state of Florida for sex trafficking destinations.” With this problem hitting so close to home, there should be no reason why we should not be aware of it nor should be be ignorant of the warning signs of human trafficking.

Human trafficking, specifically labor trafficking, can be seen on the farms here in Florida in a more recent dilemma. Some of the tomato field workers face poor working conditions, unsubstantial pay, and ridiculous hours all the while receiving no respect from their employers. The only way of receiving salvation is through the Coalition of Immokalee Workers (CIW) and the Fair Food Program which ensures better conditions for the migrant workers. Without their help, the workers remain trapped in this modern day slavery. However, the CIW cannot do it themselves, they need support from the people to spread awareness of the injustice; AHN art students took this job.

Many artists featured the same tomatoes that the workers slave to harvest every day in their artwork, while illustrating the hopelessness that these workers must feel. Additionally one poster called to attention the fact that one popular food supermarket refuses to recognize the hard work the harvesters put into the produce. Unlike a wide variety of stores, restaurants, and markets the poster stated that Publix Supermarket still refused to purchase the produce from companies that partners with the CIW, meaning that they still reap the benefits of injustice. The art students valiantly stood against the supermarket, encouraging others to avoid purchasing produce from them until they sign with the CIW and support equal rights for the migrant workers.

“The Penny per Pound Contract  would help the migrant workers and it’s a shame that Publix won’t sign it,” says Angela Robbins, a senior at AHN and Arts Fest guest, “Although the migrant workers are being paid, they are trapped by poverty. Increasing their salaries would open up more options for them.”

Not only were the artists heated on the subject, AHN performers reflected their passion through their displays. For the first time, a group of school musicians joined together thus creating a band, Panda Express, in which Sophomore Paula Hernandez on guitars, Junior Samira Mantri switching between bass and viola, and Senior Nicole Parrella on cello, along with vocalists KeTaira Phillips, Hilda Delgado, Kayla Rodriguez and Rachel Anderson, the band created a dynamic sound with the ability to recreate covers of various popular songs. Some included old rock favorites like “Another One Bites the Dust”, by Queen, “I Love Rock and Roll”, by Joan Jett, and “Sweet Home Alabama”, by Lynyrd Skynyrd, along with newer favorites “Sweater Weather”, by the Neighborhood, an acoustic version of “Dark Horse”, by Katy Perry, and  “Radioactive”, by Imagine Dragons. Through the lyrics of the songs “Blown Away”, by Carrie Underwood,  “Red”, by Taylor Swift,and “Crazy Train”, by Ozzy Osbourne, the young ladies not only earned the cheers of new fans, but also helped to tie their performance with the theme of this year’s Arts Fest.

“With some of the songs we chose, the lyrics helped listeners to feel and understand the inner turmoil that those being human trafficked feel,” says Vallie Joseph and drummer, “The other songs we chose were just to lighten the mood a bit.”

After an hour of melodies by Panda Express, all Arts Fest guests were allotted to travel to Brady enter North to experience the performing arts students showcase their own message about human trafficking. The Drama II students, sponsored by the  Bayshore Thespians, performed an original one act play, One Door Away, which exhibited how victims of human trafficking could lie right under our noses.

“I hope that the audience is able to take away the warning signs of human trafficking from our Drama II performance,” says Jessica Riddle, a senior actress in the production and Drama student, “I hope they are encouraged to stand up for victims and report the injustice to the police.”

Right after, the AHN Quarter Notes sang and danced to both original and popular songs including their own Disney Mash Up, an acapella mash up version of “Just the Way You Are and Just a Dream” originally performed in Pitch Perfect, Beethoven’s “Minuet in G,” and the Glee version of “Someone Like You/Rumor Has It” mash up. Similar to Panda Express, the choir chose one song, an acapella version of John Lennon’s Imagine, to connect their music to the Arts Fest theme.

Marie Dela Cruz, a Freshman Quarter note recalls the moment onstage, “With the hand gestures and the way we put a piece of ourselves into the song, we felt like we were truly one. Especially at the end, “and the world will be as one,” it was like the lyrics came alive, and I hope that the audience could feel it too.”

With the short film that the Quarter Notes created at Disney World, the night of awakening awareness closed to the song, “Circle of Life,” from the Disney Movie, Lion King. With the knowledge of human trafficking instilled in the heads of all the arts fest guests, truly the AHN art and performing arts students had succeeded in spreading the word: the first step is solving the issue.