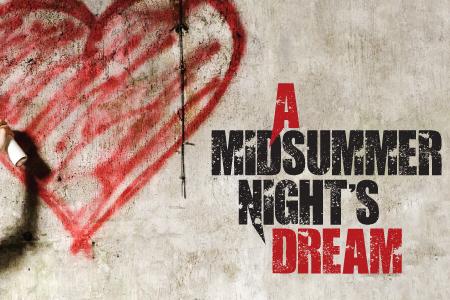 On Tuesday, September 30, the Asolo Repertory Theatre made their annual visit to AHN. This year, the actors presented their modern take on “A Midsummer Night’s Dream”. Many AHN students were already familiar with Shakespeare’s classic- but certainly not as they saw it performed that day.

“A Midsummer Night’s Dream” is the story of two different worlds: Athens and the forest of the fairies. The actors were able to comically yet accurately tell the modern story of this normally 5-Act play. The characters were put into a more contemporary monarchy; for example, the Dean of “Athens Academy” representing the king, and the students representing the love-stricken young adults.

The entire set was made up of only a simple blue curtain and three large chests. The curtain doubled as a backdrop and as a “backstage”. It also helped differentiate between “Athens Academy” and the forest of the fairies. Each actor and actress played at least two different roles; the dramatic difference in costumes between each character helped the audience differentiate roles.

A huge part of the show was the music. The show weaved modern songs into the plot including “Turn Down for What?”, “Fancy”, and “All About That Bass”.  Also featured were a short choreographed dance number and an operatic a capella version of “Grenade” by Bruno Mars! Laughter was frequent throughout the performance.

As they do each year, the actors and actresses had a “talk back”, in which they both asked for responses and took questions from AHN students. Some of the questions our students asked were:

Q: What’s with the kneepads?

The kneepads were to protect the performers from injury as they are frequently rolling on the ground or crawling. Sometimes, they may have two performances in one day; if they get hurt during the first performance, it would certainly take a toll on their second.

Q: How long have you all been acting?

The answers varied from beginning at age four to just beginning to participate in high school.

The actors and actresses ranged from age 24 to 32.

Q: How were you able to change so fast?

The costumes were made to be simple to make transitions between characters. For example, a few of the actresses simply had to tuck and untuck their shirts, and actors simply slip on a jacket over their other costume. Another handy tool was Velcro for easy removal of small accessories.

If you are interested in seeing the show again or seeing more performances from the Asolo Repertory Theatre, check out their website!