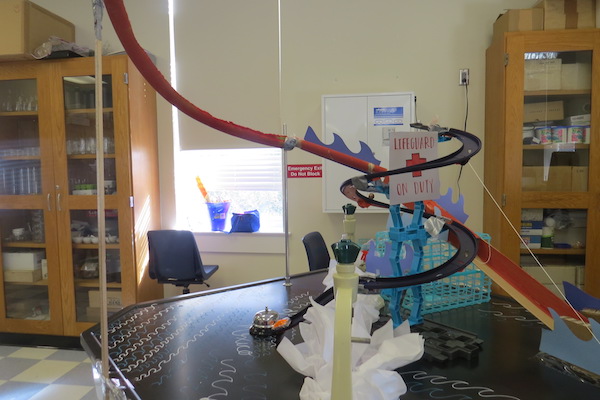 Each of the groups were given 3 full class periods to create their contraption. Each group had 4 people, and a total of 4 hours to work on the project.

The machine must accomplish a simple task such as pop a balloon, knock over an object, etc. Prior to the simple task, there must be at least 10 steps leading up to it. Each project involved dominos, and any materials the group brought.

Each project has to have one theme. The projects within the AP physics class this year were based on Arcade, Harry Potter, Mardi Gras, New York City, Ocean, and Spy.

The judges were Stefanie Zummo, Dr. Art Raimo, and Mrs. Camille Jowana. There was a rubric provided by the contest itself that the contestants were judged on.

“Our project had worked flawlessly overtime, but the day of the judging someone knocked over the cardboard holding the pulley system and when we re-taped the cardboard, we taped it at a different angle causing the project to be thrown off,” Courtney Farrior, senior, explains.

The final standings for the project were: