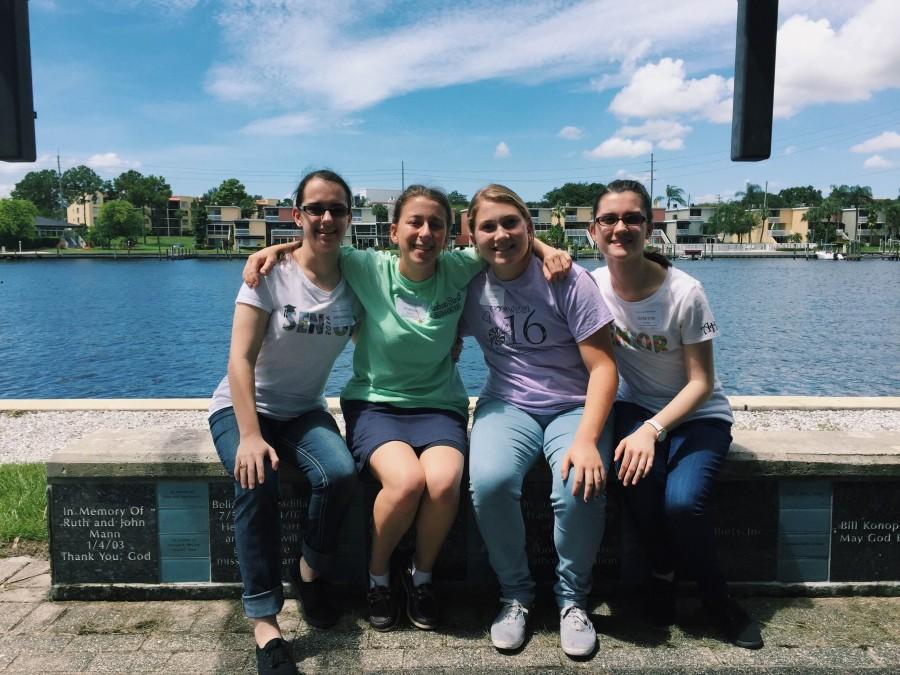 Seniors Alessandra Tanase, Jeanine Ramirez, Larissa Simon, and Stefannie Tanase enjoy a beautiful day among their sisters in the Class of 2016

On a beautiful Friday morning on September 11, 2015, the class of 2016 gathered at the Franciscan Center to attend the annual Senior Day of Reflection. Taking place on the Hillsborough River, the Franciscan Center was the perfect setting to enjoy a spiritual and relaxing day together as a class.

The morning started off with a fun icebreaker where everyone wrote down three things most people don’t know about them on a piece of paper, then Katie Holland, Campus Ministry Coordinator, read each one and everyone had to guess which one of their sisters was being described! After the icebreaker, senior class president, Caroline Lamoutte gave a heartwarming speech reflecting on Sydney Wynne, and how it brought the Class of 2016 together in an incredibly special way, something she admits, never thought would happen. Lamoutte made all 98 girls laugh, cry, and reflect on their spirituality in under 10 minutes, something not easily achieved by any public speaker! “Caroline Lamoutte’s speech perfectly summed up how our class feels about senior year. Everyone laughed, everyone cried, and it brought us even closer together as a class”, recalls Maddie Matesich.

Along with Caroline, the girls received advice from Kelly Carey (A’06), about how to deal with the difficulties of senior year, such as receiving a rejection letter from your dream college, which was very insightful and will certainly be helpful for the senior class in the near future. Next, the girls were broken into 10 groups to decorate a puzzle piece that created a letter, that eventually spelled out “REFLECT GOD” when pieced together with the other group’s letters. From this, Reflect God,  became the theme for the rest of their time at the Franciscan Center.

As if the day couldn’t get special enough, two more seniors, Christina Thompson and Mollie Johnson, led the group by sharing about their individual experiences of their own spirituality, two stories everyone listening could relate to. Then, the girls were fortunate enough to attend a short Mass with Father Steve before congregating outside by the beautiful river to eat lunch together.

The last activity the girls participated in may have been the most special. Each girl received a name of another girl within the class of 2016 and was asked to silently reflect about this person, then to come up to the front of the room and say a small prayer for them. It was touching to receive such a personal prayer from someone in the class, especially if it was someone you don’t normally talk to. After each prayer was said, everyone received letters from previous seniors in the Class of 2015, giving them advice on how to survive senior year and how to focus on what’s important, such as making sure you spend enough time with your family before going off to college and to not take any minute for granted. Reflecting on these letters with advice from the Class of 2015 was an impactful way to end such an empowering and spiritual day for the Class of 2016.