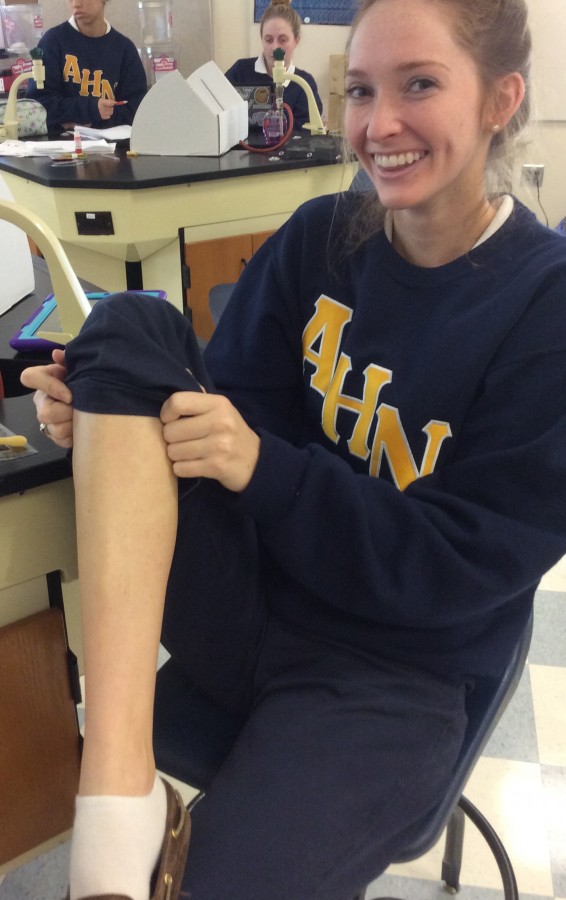 Credit: Grace Baxter Senior Bryanna LaRussa states "I think No Shave November is really cool and for a good cause."

The beginning of November signifies the beginning of a trend that everyone has been waiting for: No Shave November. Participants put down their razors and get ready to grow out their new locks in an entire month of non shaving.

While many people believe that No Shave November is just a free for fall of not shaving, it actually has its origins as an organization for cancer awareness. By letting new hair grow out, participants are encouraged to donate the money they usually spend on grooming to cancer research. The organization started in 2009 when Matt Hill, a father of eight, died of colon cancer. His children started the “No Shave November” foundation and it was quick to take off; “No Shave” November is now global phenomenon.

“No Shave” November has mostly had a male participation, there has been a significant increase in girls that have joined in on the trend. “I will be participating, but I didn’t know that “No Shave” November was for cancer awareness,” Senior Pia Roca reveals. Some students simply don’t have an opinion. Junior Audrey Dunn discloses, “ I’m neither for or against “No Shave November”. I understand both sides of it, but will not be participating myself; personally, I can’t stand the feeling of not shaving for an entire month!”

Though they may not be participating, some girls cheer on or relate to the ones that do. Freshman Megan Scanlan states,  “I don’t plan on participating in “No Shave” November… although I think it’s cool how people do. Personally I could not go a month without shaving my legs so I don’t know how people do it.” Sophomore Lauren Sellers adds, “I’m a swimmer and so we have to shave for States, which the first weekend of November. So no, I won’t be participating. Technically, the swimmers had their own “No Shave” October, though.”

We’re kicking off #NoShaveNovember with this great tutorial by Andrew Carruthers, education director for Sam Villa. Check out how to clean up and trim a beard! Get the full video tutorial on our YouTube channel(direct link to video in bio) @andrew.carruthers #samvilla #samvillahair #movember #beard #beardedmen #hair #hairstylist #stylist #menshair #beardtips #beard #beardlife

Donations to the “No Shave” November organization can be made through their website, or through buying their bracelets and apparel, whose revenue goes towards the cause.