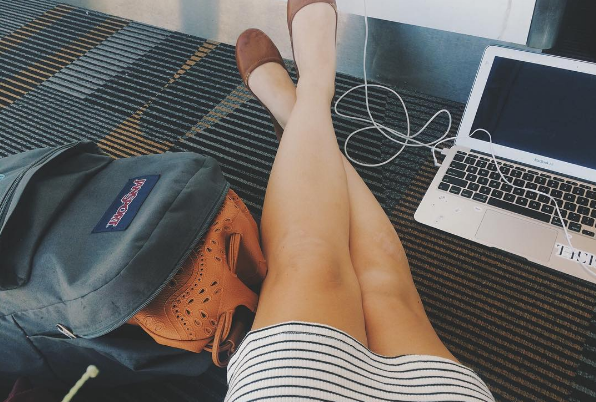 OXFORD" when she recently took a plane to visit her future school, Ole Miss." />

As of May 1st, National College Decision Day, our AHN seniors will have decided where they will go to college. Many seniors will be traveling across the country to attend schools as far as California, New York, Nebraska, and Florida. Getting home is one of the many things a new college students worries about when they go away from home for the first time. There are three major means of transportation in the U.S. (planes, trains, and automobiles) but which one is best?
Planes
Planes are the safest and the fastest means of transportation. A non-stop, roundtrip flight up North takes anywhere between two and a half hours to three (depending on weather) to get to your destination. This makes students hours away from home and getting home quickly a breeze. What prevents many from flying often, however, is price.

AHN Senior Alma Torres, who will be attending school on Chicago, shared, “I’ll fly home. The only thing against it will be price. It’s annoying.”

Flights to states farther north than New York, or all the way out to the West Coast, usually require for the plane to make a stop on the way. As well, if you are flying into a smaller city or airport, or a more isolated town, you may have to stop and board a smaller plane.

Time: Airplanes reduce travel time by hours. Rather than spending two days traveling, once you take off a plane can get you there in a matter of hours. Once on a plane, it can take up to eight hours or a little longer to get to your destination on the West Coast.
Fun: Flying is often easier to do because a lot of people enjoy it. Sometimes people simply enjoy the airport.

Cost: On major airlines, such as United, Delta, and JetBlue, the cost of a roundtrip nonstop flight to New York for one adult could be around $271 and $309.
Waiting: Some people like airports, others not so much.
Delays: Flights are relatively unpredictable. With weather, full flights, and a backed up runway, it could take hours more to for a flight to arrive or take off.

OVERALL: Planes make traveling farther distances much shorter. Even though their arrivals and departures can seem unpredictable, they are reliable to get you home the fastest. Students attending school closer to home in states such as Georgia, Alabama, Tennessee, or the Carolinas, could be home in little under two hours, depending on weather. It is a hassle since tickets are expensive to buy if you plan to go home or visit more than once or twice in a month.
Trains
Trains are maybe the least used means of transportation but will get you where you need to be. The fascinating thing about trains is that you can have your own bed and bathroom as well as full meals. These amenities are offered on airplanes but usually for long distance, overnight, and overseas flights. Amtrak is one of the largest commercial train companies in the United States.

Torres, also shares “I have family in Wisconsin so I’ll be taking a train from Chicago to Wisconsin since I won’t have a car. I’ve been on that train before, it’s about a two hour ride, and it’s nice but it is lonely going by myself.

There are two different kinds of train cars, the Superliner and Veiwliner, and each offers different sleeping and dinner accommodations to fit individual needs. Sometimes price of a ticket can help make deciding which to ride easier. That being said, depending on your destination, choices of train type may be limited.

Food/sleep: Certain trains have their own beds and dining carts to make the long trips more enjoyable

OVERALL: Trains are not the most ideal means of transportation for many that are long distance. They require long periods of time, depending on the train they are sometimes less expensive than flying, and roundtrips would be much less frequent because of the time commitment required. Traveling alone for a long time can be lonely but, unlike flying which takes a matter of hours, sitting in a train overnight (or maybe even a couple days) is a major disadvantage. To make up for that, trains can be very comfortable and provide meals and a place to sleep. You don’t always get that on a plane or in a car. For those close to family, and without cars, it could be a real quick and easy way to get away for the weekend.
Automobiles
Before planes became the most common form of traveling, and when they became expensive, cars were the go-to. For some, road trips are a source of quality boning time. Being stuck in a small moving space filled with your favorite people for hours can create a lot of amazing memories.

AHN Senior Megan Bajo, who will be attending Florida State, explained “My sister and I are going to drive down from Tally. I hate it because of the four hour drive.”

Quality bonding time: Car rides are filled with card games, reading books, watching movies and many moments that you won’t forget. There are tons of fun things to do to have fun on a road trip!

AHN Senior Jessica Villa shared with us her favorite road trip memory.”One of my favorite road trips was my second time driving out to California.” says Villa, “My brother was stationed in Camp Pendleton in San Diego, and we had to pick him up to take him to my cousin’s wedding in Colorado. It was thrilling to be pressed for time in the way that we were. Failure was not an option. However, the actual car rides got pretty dull after a while. Eventually you get sick of your mother listening to audiobooks and eating all of your snacks.”

I want to go on a road trip! ?? pic.twitter.com/YUUUg2jB4z

Food: When on the road, Cracker Barrel is one of the most frequented and known dinner stops. Rather than eating plane and train food, you can stop whenever and wherever you’d like.

Time: Although it requires less time than a train, it takes almost 16 hours to get to New York City. It takes around 38 hours if you’re driving to California. Don’t forget though, stopping to eat, sleep, and enjoy your surroundings tacks on to the length of your trip

Energy: It takes a lot of work to drive for hours at a time, especially all the way out to California or New York.

OVERALL: Taking a road trip is a ton of fun and quality bonding time but it requires a lot of will power and determination. Often people road trip because planes and trains are too expensive or flights are booked because of the holidays. It’s times like road trips where you get to experience the great outdoors and wonders of your country first hand (as well as catch up on a few zzz’s)!