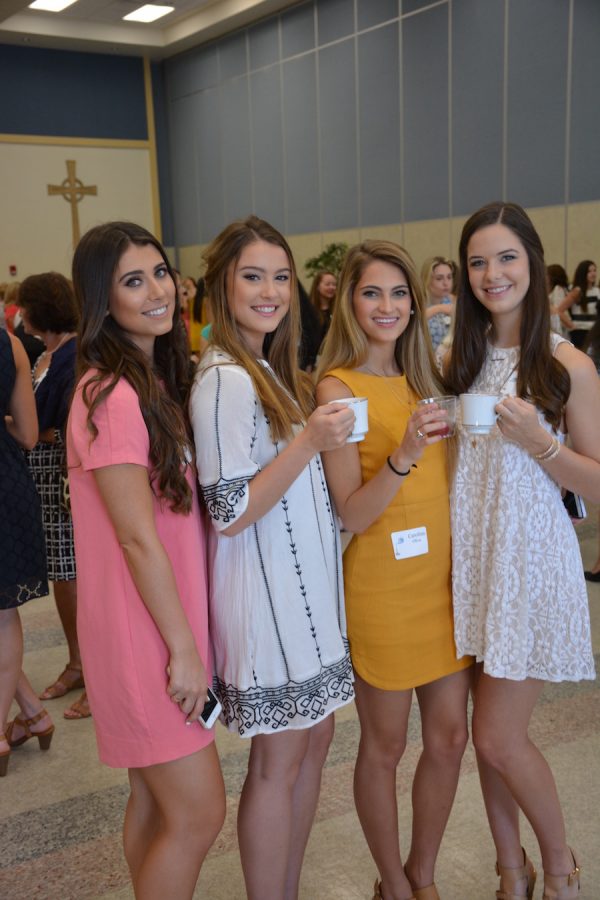 Silver Coffee is a brunchy celebration of grads and parents followed by a formal induction of the seniors into the alumni association. Photos are snapped, congratulations exchanged, and maybe even a few tears shed. The seniors arrive in their Sunday best for one of the last times they will stand in the Brady Center. Soft piano is playing, and fancy appetizers and desserts are served by junior members of the Ambassadors Club.

Seniors and parents enjoy the food and each other’s company as the students toast to the end of their last year, and prepare to disperse to their prospective colleges throughout the country. There are plenty of “remember whens” and “I can’t believes”. The air is full of all the expected chatter that accompanies a class being ushered out of Academy and into adulthood.

Silver Coffee is a tradition that began in 1929. It was originally a Silver Tea put on by the Mother’s Association, where seniors wore their “dress uniforms”, a white dress, and served their mothers.

Mrs. Bohannan chuckles, “The privilege of the seniors was that they actually got to attend.”

The Silver Tea had many aspects of a fundraiser as well. They accepted donations, and mothers would spend the week leading up to the event cooking and baking things they could sell to earn money to pay for the tea.  As mothers began working full time, it became harder to provide goodies for sale. In the mid-nineties, the alumni association took over the Silver Tea, which had transitioned into a coffee, and split the cost with the mothers association. This nixed the idea of a fundraiser, and Silver Coffee became a celebratory brunch focused on welcoming the seniors to the alumni association.

“We are trying to make it evolve with the times yet keep the traditions that are fun about it.” explains Mrs. Bohannan.

To the seniors, Silver Coffee passes in the whirlwind of events that finalize their graduation from high school: the running of the halls, senior letters, honors convocation, senior farewell, and baccalaureate. But the seniors are determined not to let Silver Coffee go by without appreciating it.

Miranda Plummer reports at Silver Coffee that she feels “nostalgic”, and Caroline Yount agrees. Looking around with pride at all of her fellow graduates she says her favorite part of Silver Coffee is seeing everyone look so beautiful.

Yount is most looking forward to senior cruise, college, and most of all, visiting other people at college.

“I’m going to Nebraska to visit Miranda. I don’t know what there is to do there besides cows and corn, but I’m coming.” she jokes.

Sajani Mantri remarks that these celebrations are sincerely bittersweet. She reflects that her favorite part of her last week of senior year was everyone realizing that it was their “last moment together.”

She shares, “It’s kind of sad but exciting at the same time because we’ll all be moving on to something else. Yesterday was our last day in the lounge and we all just sang together and everyone was laughing and crying; it was really fun.”