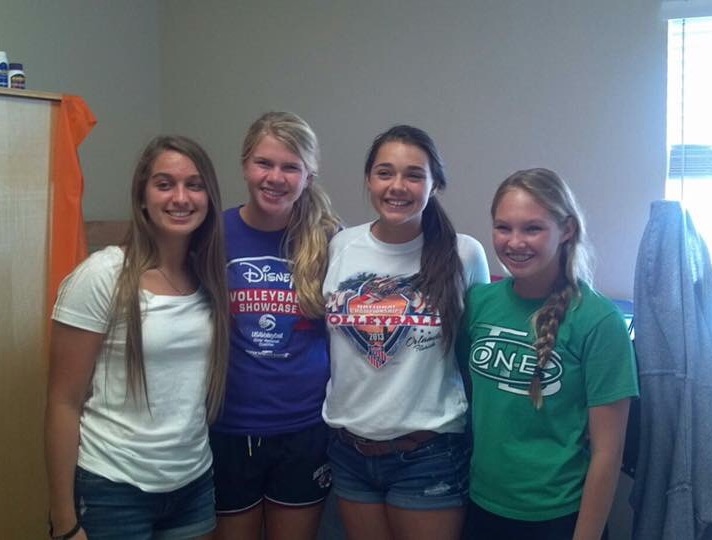 Some seniors can’t help but cringe when they look at old pictures from freshmen year.

Freshmen year is a time when students go through many changes: new school, new friends, new environment. As a result of this, it is common for there to be some embarrassing moments every now and then. After gaining a few years of experience, some seniors look back and share their most cringeworthy moments from three years ago.

Ann-Marie Heath is one senior who has a story no one will forget.

“Freshman year I wanted everyone to think I was really deep, you know, make it obvious that I was into obscure bands. So I literally would spend thirty minutes everyday before school applying this jet black super intense eyeliner. I was convinced that if I didn’t, no one would take me seriously, which ended up having the COMPLETE opposite effect. It’s probably one of my biggest regrets… definitely self sabotage.”

The first month of freshmen year, senior Shannon Flaharty seriously injured herself, requiring her to have her jaw wired shut. Coming to Academy not knowing anyone and not being able to speak, Flaharty was put into many uncomfortable situations.

“Whenever I tried talking to people, it was so awkward because nobody could understand what I was saying. I would repeat myself like 20 times and the whole time I would just think, ‘Why am I still trying to talk? There’s no way they’re going to understand me and I would eventually just be like, ‘Never mind.’ and give up…”

Jessica Zakhary recalls a specific interaction with Flaharty at that time, stating “Shannon and I were in computers class together. She seemed really nice, but she was always so quiet, so I decided to talk to her. She never talked back, but I just kept talking for literally the rest of the semester, not catching on that she had broken her jaw and physically could not talk back. When she did try to talk, she just mumbled incoherent phrases so I just smiled and nodded at her as if I understood. It’s so funny to look back now and think about how that was how our friendship started.”

Chloe Paman and Laura Henry have an unforgettable story about the first time they met. They quickly discovered that they had a mutual friend in common. Paman wanted to mention Henry to the mutual friend, but she couldn’t remember Henry’s name.

Paman explained, “The next time I went to class, I turned behind me and asked her ‘Starbucks never gets my name right. Have they ever messed up yours?’ (a clever way to get someone’s name out of them). When I turned back around my desk I decided to type her name into my iPad. At that moment I hear a laugh and I realize that Laura saw me typing her name into my notes. It was so awkward. But I’ve never forgotten her name since then!”

She recalls, “The first few weeks of school, I was going to sit down in the Brady Center and I had just gotten a smoothie. I went to sit down and my chair was pulled out from under me so obviously I fell. I realized it was Brittany Bramwell, so I was just really confused because we didn’t know each other well. All of a sudden the bottom of my smoothie broke and literally spilled everywhere.”

Kathryn Byers reminisces about freshmen year, recalling an embarrassing situation with some upperclassmen.

She shares, “I was on my way to World History and I was already running late. At that time, I never used my locker so I had all my books in my backpack. I was running up the stairs almost at the set of fourth floor stairs when I slipped. I fell down an entire flight of stairs and, to make things worse, a bunch of my books slid out of my backpack. A bunch of seniors happened to be walking down the stairs and were right above me watching the whole thing happen and then afterward laughed at me. I was so embarrassed that I grabbed my books as fast as I could and ran into World History out of breath and with my face all red.”

Freshmen year is inevitably an awkward and embarrassing year, but these girls successfully survived and finally made it to senior year.