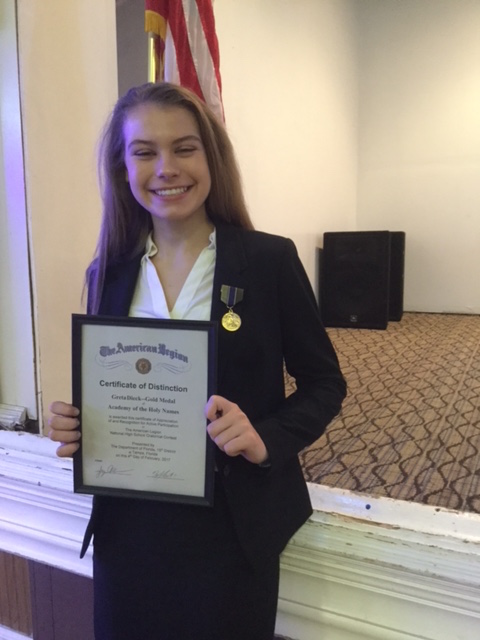 Dieck says, "I am happy to contribute to the success of Speech and Debate. Now I am preparing for higher competition."

Greta Dieck, a sophomore member of the Speech and Debate Team, won the a Gold Medal and $200 at the District level in the American Legion Oratorical Contest this Saturday, February 4. She competed against five other teenagers who were representing other Legion posts.

Dieck became a member of Speech and Debate when she was a freshman. Her journey began when she and her friends were interested in Speech and Debate because they thought it sounded fun in middle school. The first level competition was three weeks ago on January 21. Alexa Fredericks, freshman, received third place and Sydney Lowman, sophomore, placed in second. Each member had to be prepared on different topics.

Dieck says, “Alexa’s was on illegal immigration, I believe Sydney’s had to do with the adaptability of the Constitution, and mine was on the theme of We the People in the Constitution.”

There are monetary and medal prizes for the top three finishers, with the winner of each competition going on to the next level.

Speech and Debate is not the only thing on her resume, Dieck runs cross-country in fall, plays basketball in winter, and runs track in spring. Dieck sets aside time in her busy schedule to practice for Speech and Debate as the competitions approach, but it is still difficult for her to be fully prepared as she advances further and competes against high schoolers who spend all their time in preparation.

Dieck says, “I have been attempting to practice my speech once a day for this week, but it has not turned out that way, unfortunately.”

In order to achieve success, Dieck avoids procrastination or cramming last minute because of her other school activities. It can very difficult for her to find competition dates that do not coincide with Speech and Debate tournaments, but this year has not been a problem for Dieck when interfering with her athletic schedule.

During the competition Dieck usually feels pretty nervous if she is unprepared, but on Saturday, she was ready to take on first place in the competition.

She tries to appear confident and not let other competitors see how nervous she is during her speech. She usually rehearses her speech as much as possible in the time leading up to the competition, which helps her stay focused on presenting the speech.

Dieck says, “When you force yourself to do public speaking, you gain a lot of skills in regards to how you present yourself. I have grown so much as a public speaker in the year that I have done Speech and Debate. You also get to meet so many crazy intelligent kids your age who push you and inspire you to accomplish more.”

Mrs. Jaime Meyer, the moderator, usually helps Dieck prepare for speech and Debate. Although history teacher Stacy Filocco has been revising her work recently because it deals with the US Constitution. Speech and Debate gives Dieck strong speaking skills, experience doing in-depth research, and many opportunities to meet and work with great people.

On Thursday night, February 9, 2017, Dieck was honored at the Tampa City Council meeting for her participation in the American Legion Oratorical Contest and for placing first on the Post and Regional level. Joined by  Meyer, and her parents, Doug and Tricia Dieck, Greta was awarded a plaque with the signatures of all council members, appeared and spoke briefly on TV, and got her picture taken in front of the seal of the city of Tampa.

Dieck says, “I enjoy participating in Speech and Debate and feel that it is incredibly beneficial to me.”

She now advances to the Florida Central Area District contest on February 19.