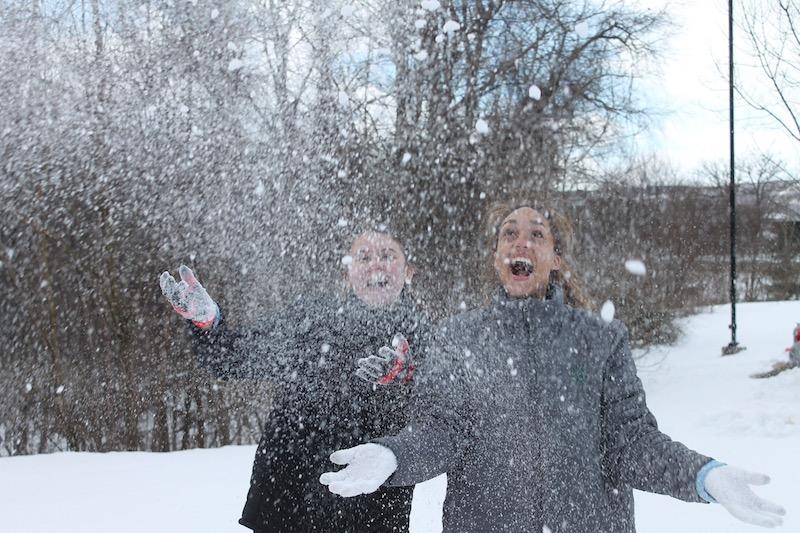 Senior and Leader Keri Kelly saw snow for the first time on the 2015 Scranton mission trip.

Every year in March, Academy missionaries set out to serve the community in a variety of northern areas such as North Carolina, West Virginia, and Pennsylvania. The same week of this years’ mission trips just so happened to be the week of the biggest snowstorm in recent years. These weather conditions caused the missionaries, who are mostly native Floridians, to adjust their plans and truly understand what it means to be “flexible.”

The trip that received the least amount of snow was in Black Mountain, North Carolina. The girls were anticipating the cold weather, but did not expect the amount of snow they received.

Sophomore Katherine Rodriguez says, “It was a lot colder than expected but it made the trip more fun because we got to play in the snow.  Going snow tubing was one of my favorite parts of the trip.  It was also really pretty on our hikes because the mountains were covered in snow.”

Despite the weather, North Carolina missionaries were still able to do the majority of their intended service. They helped out at an orphanage and volunteered at a food bank.

Sophomore Caitlyn Asher says, “I thought the weather made the trip a lot more fun. When some of us went hiking, the mountains looked even prettier with the snow on it. Instead of zip lining as the trip has done in the past, we went snow tubing. Though we could barely snow tube that much because all of our fingers and toes would go numb after tubing down the hill only a couple times, so everyone kept going back and forth between snow tubing and warming up inside.”

Unlike North Carolina, Appalachia and Scranton missionaries had to do a bit of rescheduling for their service projects as a result of the heavy amounts of snow.

Appalachia came in second for the trip with the most snow. Normally, they predominantly do outdoor housing repairs, however, the snow called for one snow-in day leaving the girls unable to do service. Weather aside, the Appalachia missionaries still were able to impact the West Virginia community.

Senior and Appalachia Leader Laura Henry says, “On Tuesday we were snowed in and able to have fun in the snow. The only thing that got canceled was a day of work. Rodger who runs the folklife center where we were staying found a kiddie pool so we could go sledding.  I was definitely not prepared for the snow because I didn’t think it would be that cold and didn’t pack right so I just put on a lot of layers and tried to stay close to the fire.”

Instead of doing their typical work building houses, the missionaries worked at the Appalachian Southfolk Center.

Freshman Emma Crall says, “We instead helped work at the Appalachian South Folklife center, which is where we had been staying all week. The other days when it wasn’t snowing, we were still working in as low aseight-degreee weather. Luckily we all had multiple sweatshirts to layer on, and I even brought a ski jacket.”

Compared to the other trips, Scranton, Pennsylvania received the most snow. The missionaries were snowed in on all of Tuesday and Wednesday which gave the term “snowed-in” a whole new meaning. As opposed to their typical work, service activities for both Tuesday and Wednesday were replaced with shoveling snow.

Junior Mia Leto says, “The snow was both a positive and negative for me.On a positive note, The walk from visitation to the IHM Center (in the middle of the blizzard of 2017) was very fun and a great bonding experience for Liz, Claire, Mrs. Henry, and I. Watching Sister Lisa sled and trudge through the snow was an experience that I would not trade for anything. We were able to go visit the sisters at OLP more than we would have if there was not snow. I also learned that I have a bright career ahead of me shoveling snow.”

Though the weather did affect some of the missionary duties, they managed to find other ways to impact the community, even if it was not the work they planned to do.

Sophomore Myah Rhines says, “Although we had to miss multiple service location due to being snowed in I know we made a huge contribution to the community shoveling out so many parking lots and sidewalks.”