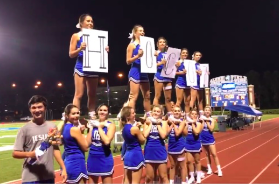 A public display courage by a student may guarantee a “yes” from an Academy girl.