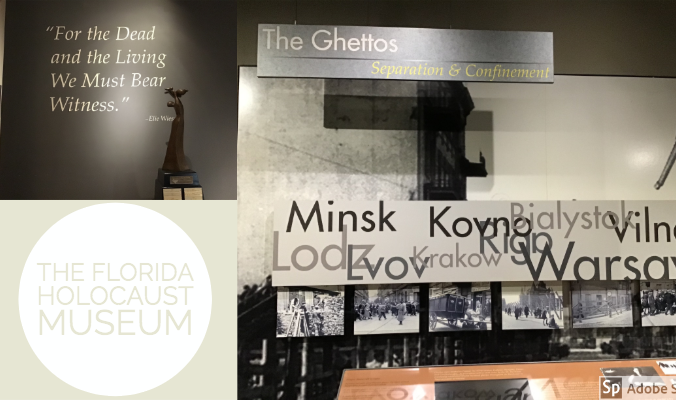 Florida is home to one of the largest Holocaust museums in the nation.

In correlation with the tenth grade’s History and English curriculum, sophomore students attended the Florida Holocaust Museum this past Monday and Tuesday, Nov 18 & 19. Prior to the excursion, the sophomore class had been studying both the Holocaust and WWII as a whole with History teachers Stacy Filocco, Dana Nazaretian, and English teacher Sara Moses.
As a requirement of the English II syllabus, students had been analyzing the novel, “In My Hands,” to further their understanding of the travesty’s societal repercussions. Acquiring the help of Jennifer Armstrong, Irene Gut-Opdyke narrates her experience as both a Holocaust rescuer and a WWII survivor within war-ravaged Poland.

Upon arriving at the museum, students had been introduced to Dr. David Baras, whose own parents had been survivors of the Holocaust. To ensure their stories will stand the test of time, Baras frequently shares his mother’s travels from ghetto to concentration camp.

“My mother had first been sent to a brickyard which functioned as a holding camp. The weather had been cruel, and there were few facilities designated for housing. Her period within the camp had been short-lived as she was soon sent to Auschwitz with her mother, father, and sister. Within moments of their arrival, they had been forced to strip their clothing, bathe, and receive a tattooed number, similar to that of cattle. To this day, my mother has the lettering A5838 etched along her arm,” explained Baras.

Having listened to Baras speak, students were then divided into several tour groups to be led around the museum. Exhibits included display cases of artifacts and replicas alike and followed a progression of before, during, and after the Holocaust.

#TheFHM and #LawyersOfConscience invite you to attend “Eugenics in America: A History of Injustice,” Presented by legal historian and author, Paul A. Lombardo, PhD., J.D. on 12/3 at 6:30p.m. The cost to enroll is $10. Please reserve online at https://t.co/1ne0OkofWI. pic.twitter.com/5TnHaQDz1i

Similar to Baras, Felix Kalinowski, a member of the Academy’s theology department, has Polish relatives who were survivors of the Holocaust. Kalinowski, who attended the excursion as one of the faculty chaperones, understands and appreciates the museum’s efforts to keep both his history and the histories of thousands of others alive:

To conclude their trip, members of the museum’s staff had hoped to impress upon its visiting students the importance of becoming an “upstander.” In other words, someone who takes action to protect those who are marginalized, defend one’s beliefs or even offer a helping hand. In exiting the exhibition, visitors are greeted by the words of, essentially, the museum’s motto: