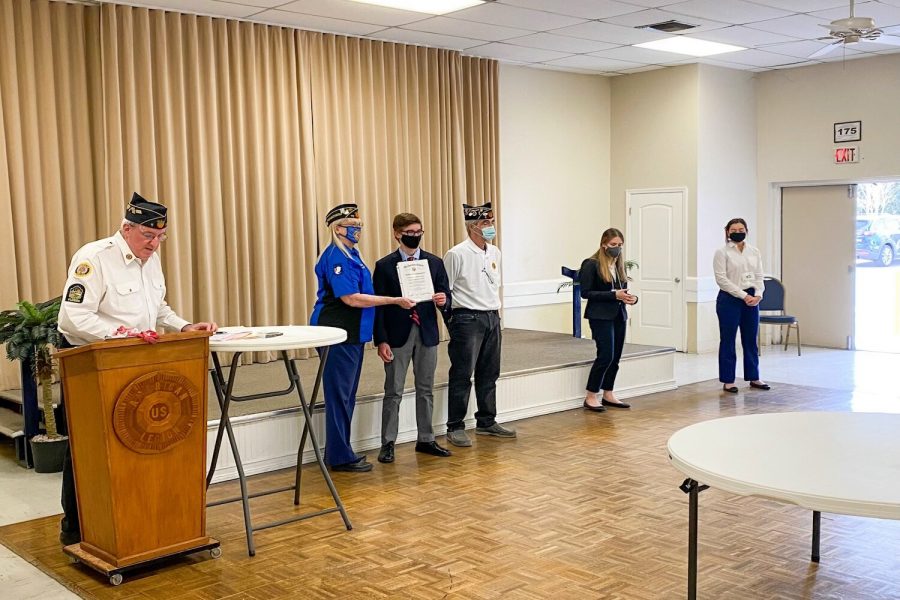 On Jan. 16, students from Academy’s Speech and Debate team competed at the American Legion Oratorical Contest. Students were required to prepare a speech detailing how the Constitution pertains to their duties as a citizen.

Founded by veterans after World War I, the American Legion is an organization designed to help veterans and provide ways for them to give back to their communities. It has two branches, the Auxiliary and the Sons of The Legion, which have similar focuses but its members are the female and male relatives of veterans respectively.

The organization has a strong emphasis on youth outreach, sponsoring events to help local high school students learn about government. Among these is Girls State, a program that teaches young women about leadership in government and that Academy has sent students to in years past. In addition to their youth programs, they also offer charity for veterans within the areas they serve, such as outreach programs for homeless veterans and support for the Veterans Affairs Medical Center.

Academy has a long history with the American Legion and its events. There is a unique relationship between the school and USS Tampa Post , the post which sponsors the events students usually  attend. During the Iraq War, Academy was able to form a special relationship with the post through the honoring of soldiers who were killed in combat.

“The funeral corteges would pass by your school and then pass the Post members at Bay to Bay and Bayshore Boulevards. Seeing your students along the front wall holding American flags made a deep impression on our post members and the families of these heroes,” said Oratorical Chairman of USS Tampa Post 5 Frank Smith.

Smith has been a key figure in Academy’s relationship with the American Legion. Smith has made great efforts to involve Academy students in youth events and to keep these events running throughout the years. Post 5’s primary income source is renting its hall out for different events. Covid-19 has prevented these events from happening, and as such hurt their income.

Covid-19 has also prevented the meeting of members of the Legion and its volunteers, further slowing down its work. The pandemic has affected other posts across the nation in similar ways, causing them to put a hold on community outreach programs such as the Oratorical Contest that are supported by profits made throughout the year.

However, despite the damage done by Covid-19, Smith ensured that every event that could be adapted was able to happen under new public health regulations. This included the Oratorical Contest that Academy students participated in. Even in a pandemic, the Legion still sought to serve the community and help the youth grow.

“Mr. Smith is a huge advocate for Academy and for students to have as many opportunities as possible. He strives for active participation from our students, as he recognizes our caliber and how our background helps our girls to go far,” said Speech and Debate Moderator Dr. Julie Omodio-Griess.

Academy students have benefited greatly from the opportunities provided by the American Legion and its programs. The programs help to improve public speaking skills, writing skills, and knowledge of government structure and current events. It also provides an opportunity to learn from more experienced members of the community, such as the judges and leaders of the contests.

While Post 5 has continued to work in the community, Covid-19 has impacted the facility. With only 125 members, the Post is small in comparison to others. As such, community involvement beyond members is important to their operation and success. Students can become involved by participating in the many programs and contests they offer. They can also support the Post by attending its annual events, including their Memorial Day Ceremony in May and their Wreaths Across America ceremony in December.