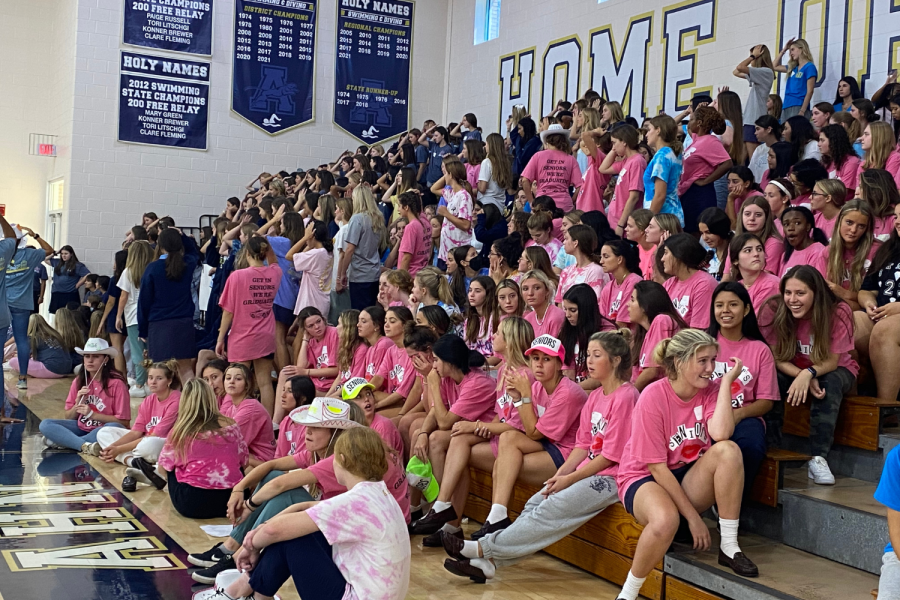 Seniors wore their senior shirts for the first time together at all-school orientation.

It’s the beginning of the 2022-2023 school year, and many changes have been made. The administration office has some new faces as Jeane McNamara joins the AHN family as the principal. Former English teacher Melissa Cox is the new Assistant Principal for Student Leadership. Many more faculty have joined the school this year.

With the new school year comes new rules. The AHN Handbook has been updated with some new regulations. Pleated skirts are available as the new uniform, and it is mandatory for freshmen to wear them. Skirts are to be no more than three inches above the knee. Skirts that are too short can result in a warning, and on a second infraction, detention.

Regina Alfonso (‘23) said, “I really like the new skirt. I think they are much cuter than the old ones, and even though the old ones are a bit more comfortable because they have shorts underneath, I think the benefits of the cuter new skirts outweigh the discomfort of having to wear your own shorts. As they say in a Saturday Night Live skit, ‘It is better to look good than to feel good!’”

“I think the new phone policy is too harsh. It has been more difficult for my parents to contact me if there is anything important, and I keep getting lost because I cannot check my phone in the hall to see what class I need to go to,” said Junior Sofia Bailey.

Advisory has been revamped as new Student Activity Director Angela Leavens implants the new Flex period. This Flex period has small groups, workshops, and tutoring sessions during advisory time on Tuesdays and Thursdays. Sign up for Flex time can be found on the Veracross student portal. Flex time allows students to have time to focus on what they need to, whether that might be meditation, homework, or journaling.

The new school year kicked off with freshmen orientation. Run by Student Council, freshmen orientation is a rite of passage for incoming freshmen and transfers. During orientation, freshmen got to know their advisory and class schedule. They played games and, as always, had to spell their name with their butt or sizzle like bacon.

The next day, everyone gathered on campus for the first time this school year for all-school orientation. Also run by Student Council, all-school orientation brought together every grade for fun and bonding. Student Council broke up into small, food-themed groups to help students get to know people from different grades. Games like jockey up, human knot, and hula-hoop race forced students into fierce competition. In the larger group setting, things got intense in a game of Head, Shoulders, Knees, and Cup, and friendships were tested in a game of Ships and Sailors.

Student Council President Amanda Chau (‘23) said, “Planning orientation was crazy sometimes — it was a lot of work putting together t-shirts, activities, and everything else — but when the time came, it was really nice to see everyone having fun.”