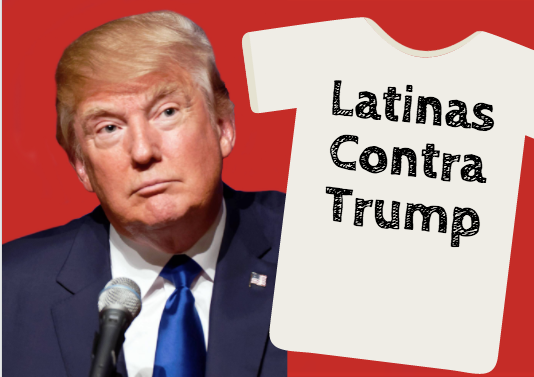 Eric Trump organized a rally in North Carolina on Friday October 21 and the sisters, who are Hillary supporters, decided they would attend in protest. Neither are particularly outspoken, and both were nervous about the backlash they could face if they decided to do something extreme. Younger sister Annie (17) decided to get a plain white t-shirt and write in sharpie “Latina contra Trump”, which means “Latinas against Trump”. She was sure people would know immediately what her shirt said, but upon arriving, she was shocked that almost no one seemed to recognize its meaning.

‘Con’ in Spanish means ‘with’, so it is possible people read the shirt fast and missed the last three letters, or perhaps most people in attendance had limited knowledge of the Spanish language, and since they knew ‘con’ means with, they assumed ‘contra’ was something positive along the same definition.

Cardelle took pictures with supporters, and even Eric Trump.

No one at the rally realized my shirt said AGAINST tr*mp… congrats, y'all played yourselves ✌?️✌?️✌?️ pic.twitter.com/qZ3x1ER8j0

Their tweets went viral and the sisters received copious positive reinforcement and praise for their bravery.

Cardelle was getting so much attention, she decided to create a website where she sells Latina contra Trump merchandise, including hats, tote bags, and shirts.

Some Trump supporters shamed Cardelle; however, for embarrassing Trump, and claim there is no reason anyone at the rally should have been responsible for knowing what ‘contra’ means.

These people were criticized by others claiming that understanding Spanish is not necessary to know what ‘contra’ means.

@AngelaTC Are you unfamiliar with words such as contraband, contraindicated, contrary? It is a root word with a clear, concise meaning.