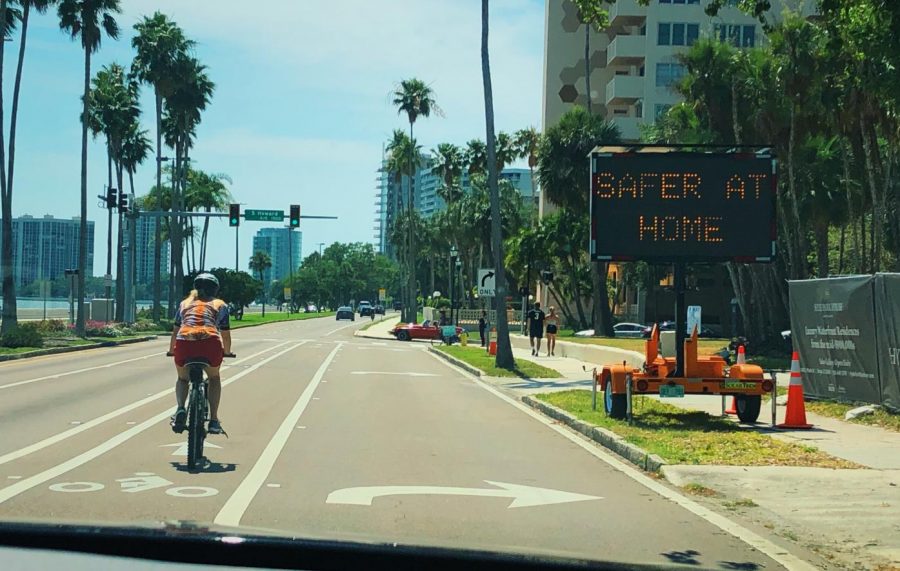 “More people need to be responsible behind the wheel and understand the lives they could affect by their decisions,” said Kara Kivenas (‘20).

A fatal crash involving a motorcycle and a bicyclist on Bayshore Saturday, April 8, now marks the fifth death on the popular waterfront road in the last two years.

Police reported three motorcycles were racing northbound when a bicyclist attempted to use the crosswalk near Rome Avenue. Witnesses told News Channel Eight, “They were kind of leapfrogging, speeding, you could hear them revving their engines,”

One of the motorcyclists, 31-year-old Justin Glenn Winterhalter, then collided with a 50-year-old Holmes Flowers. According to police, Winterhalter died at the scene while Flowers was later pronounced dead at the hospital. Flowers was a father and attorney who graduated from the University of Florida.

The deadly crash came only three months after a drunk driver hit and killed 70-year-old pedestrian George Gage. The victim was knocked into the water as the vehicle demolished the balustrade. The horrific scene occurred only feet away from Academy’s doors, near the intersection of West Julia and Bayshore Boulevard.

“I was in Social Justice when it happened. The entire class heard everything. A few minutes later, there were fire trucks and ambulances. It was scary,” said Megan Smolarick (’20) to the Achona earlier this year.

Tampa Mayor @JaneCastor is calling for a citywide crackdown on speeders & dangerous drivers after yet another deadly crash on Bayshore Boulevard on Saturday. https://t.co/CpBFvDkf3u @10NewsWTSP

In light of #socialdistancing some want the street to be closed to cars on weekends. pic.twitter.com/TvVEEo7gYZ

In May of 2018, both 24-year-old Jessica Reisinger-Raubenolt and her 21-month-old daughter Lillia were struck and killed crossing the road by two teenagers street racing. According to police, the teens drove north from Gandy up to Bayshore, reaching speeds as high as 102 miles per hour. Both victims were taken to the hospital and were later pronounced dead.

Following the tragedy, the city lowered Bayshore’s speed limit from 40 to 35 miles per hour. Still, it did not prevent the deaths of Gage, Winterhalter or Flowers. And now, residents in the area are calling for more measures to be put in place.

“As a student at AHN and someone who likes to spend time biking on Bayshore, it is quite concerning to hear of these accidents. It reminds me to be really careful and attentive when walking, running or biking. In the duel between motor vehicle vs. human or motor vehicle vs. bike, the motor vehicle always wins,” said Rachel Brown (‘20).

Mayor Jane Castor released a statement regarding the most recent crash on April 8, saying, “Right now, more than ever, we should be looking out for each other and following the law. What happened today is unacceptable…The bottom line is that today another bad decision cost lives.”

“I think it’s ridiculous how people do not follow the rules. We have rules in place for a reason. About a year ago people were speeding and a woman and her child were hit. The government changed the speed limit, someone didn’t follow it, and another was hit. It’s horrible,” said Olivia Perez (‘20).

As reported by the Tampa Bay Times, the nonprofit group Walk Bike Tampa sent a letter to Castor on Sunday, calling on her to close Bayshore to cars for the remainder of the coronavirus safer-at-home order.

The letter explained that with fewer cars on the road, more are likely to speed. It read, “yesterday’s horrific crash demonstrates… that Bayshore’s wide travel space and lack of impediments such as traffic lights promotes poor driver behavior.” Additionally, bikers, runners, and pedestrians are exercising on Bayshore now more than ever before – another cause of concern for the group.

Bayshore is packed w/ bicyclists, walkers, runners, roller bladers, etc – it’s time to consider closing the northbound lane closest to these citizens to give them ample space as they #stayhealthy bc #covid19 isolation will be for at least 4-6 more weeks, @CityofTampa @JaneCastor.

Propositions to increase safety measures include more speedometers, crosswalks and speed bumps. Some are even calling to close the northbound lanes entirely, turning them into a public park for biking and running, and making the southbound lanes a two way road. All options would slow traffic and prevent racing while still allowing for cars.

The problem, however, is that tens of thousands of vehicles travel on Bayshore each day, making the street a vital channel for South Tampa traffic. Still, its long path and scenic views attract residents from across the city. With no waterside parking, most are forced to cross the road.

“I think it’s outrageous that people go upwards of 60 miles per hour when there are children and families going on strolls and bike rides right beside them,” said Kathia Guzman (‘20).

Given its popularity, Bayshore needs to be more pedestrian-friendly.

2 more deaths on Bayshore Boulevard this morning (RIP). When will we say “enough” and transform this linear parkway from a highway to a linear park that allows for sensible 2 way traffic far from the 1000s of pedestrians that use it? https://t.co/54UIvvRXyy

“So many girls at the Academy take Bayshore to get to school. It’s terrifying to believe thoughtless people are not only risking their own lives, but numerous other elementary through high school students’ lives when speeding down the road,” said Leah Solomon (‘20).

As Solomon said, this issue is not only promenet to our city, but to our school. The Academy resides on Bayshore. The boulevard is ingrained into the institution’s identity, even making its way into the first line of the school’s alma mater. Everyday elementary, middle, and high school students are dropped off and picked up from that very road. The cross country team runs on the sidewalk for their morning practices and groups of AHN teachers walk its paths on Wednesday afternoons. Bayshore is Academy’s home.

“There needs to be more serious consequences in place for those driving. They are not only putting themselves at risk, but everyone around them,” said Perez.

Whether it be additional crosswalks, speedometers, or police stationed at different checkpoints – further action must to be taken to prevent future tragedies. Afterall, the first lyric of Academy’s alama matar reads, “you will find it on the Bayshore, the school that we love best.” Will Bayshore continue to be known as a beautiful space for pedestrians, cyclists and students? Or rather will become notoriously known for inexcusable fatalities?