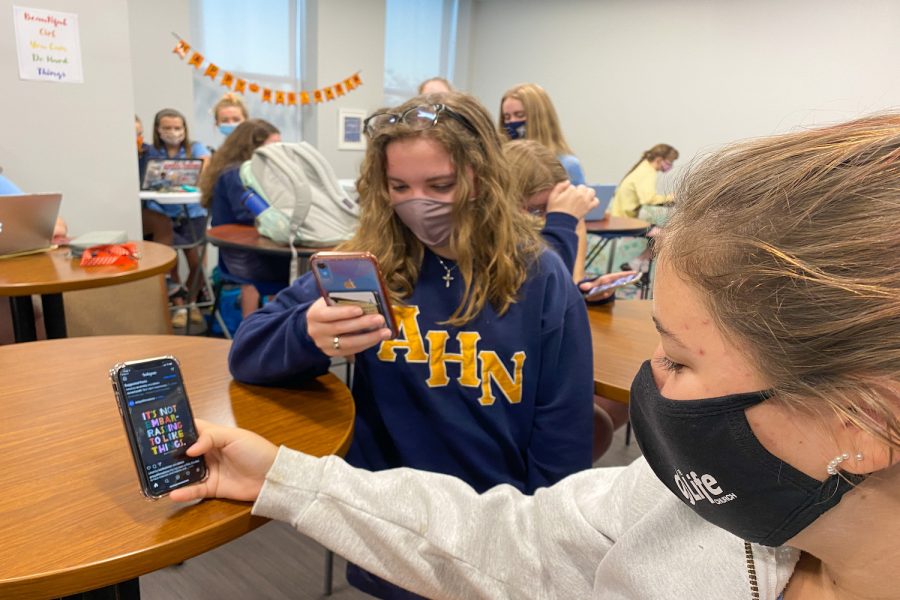 A young girl posts a picture on social media which subsequently receives multiple positive comments, but one negative comment stands out: “can you make your ears bigger?”

Then, she stands in front of a mirror, hides her ears behind her hair, and begins to cry.

On Sep. 9, 2020, Netflix released “The Social Dilemma” — a chilling documentary revealing the lack of ethics in the tech industry, the rapid spread of fake news and propaganda compared to truth, and the addictiveness of social media. Viewers watch the effect technology has on two teens in a fictitious family, which seamlessly intertwines with interviews with people such as Facebook Former VP of Growth Chamath Palihapitiya and Facebook Former Executive, Prinetrest Former President, and Moment CEO Tim Kendall.

As viewers follow the lives of the fictitious teens, by the end, instead of technology being a tool available if chosen for use, it has evolved to control and manipulate its users through addictive mechanisms such as feeds specifically tailored to each person and notifications. The young girl and older teenage boy become puppets whose strings are controlled by tech moguls.

“I’m just scared, especially because of that reference to users being like a voodoo doll and [internet companies] having several algorithms so that they become like a puppet master controlling what we do in the course of our day even without us knowing — is frightening,” said Social Studies and Psychology Teacher Dana Nazaretian.

The documentary presents a very negative portrayal of Generation Z — people born after 1997, according to Pew Research Center — those who are damaged as a result of social media.

Author and NYU Stern School of Business Social Psychologist Doctor Jonath Haidt said in the documentary, “There has been a gigantic increase in depression and anxiety for American teenagers which began . . . between 2011 and 2013. Those kids [Gen Z] are the first generation in history that got on social media in middle school. They’re much less comfortable taking risks. The rates at which they get driver’s licenses have been dropping. The number who have ever gone out on a date or had any kind of romantic interaction is dropping rapidly.”

And yet, the decrease in Gen Z reporting less than very good or excellent mental health compared to their predecessors is not rooted in social media alone, but rather the climate of society this generation has inherited — which is perpetuated by social media. The American Psychological Association conducted a survey of Americans ages 15 to 21 and found that “Gen Z is more likely to report stress related to these national news topics.” Those topics being mass shootings, a rise in suicide rates, climate change and global warming, immigration, and sexual harrassment and assault.

Aspen Hunter (‘23) said, “I definitely agree that the increase in mental health issues stems from today’s climate and how it is portrayed on social media more than social media itself. There is so much going on today politically and socially, and the media only enhances that. We are able to see news faster than previous generations, as well as circulating, and sometimes extreme opinions. While I think that being able to view others’ opinions helps us form our own, it can also be incredibly divisive and stress-inducing.”

As no coincidence, national events throughout Gen Zer’s lifetimes have contributed to this rise in depression and anxiety. For example, the #MeToo movement has exposed the prior neglect of sexual assault and violence done to women — gaining national attention after Hollywood Producer Harvey Weinstein received sexual assult and harrassment allegations. In addition, this past March was the first March since 2002 without a school shooting in the U.S. because of the closures of schools due to the pandmeic. Lastly, global temperatures are on the rise with 2016 being the warmest year ever recorded, and despite the U.S. being the largest emitter of Greenhouse gases, the Trump Administration has announced its decision to withdraw from the Paris Climate Agreement.

For Gen Z, climate change is a clear and present danger to our planet https://t.co/tmOTCfTwPv

Gen Z is unjustly judged by those who fail to see past their stereotypical profile — someone glued to their phone, unwilling to take risks. Contrary to this belief, this generation possesses traits which make it better capable than previous generations to grapple with the state society is in. Business Insider reported a study published in Society for Research in Child Development which found that “teenagers instead prefer to sit at home, avoid drugs and alcohol” and are having sex less often which has contributed to a signifiacnt decrease in teen pregancy birth rates since the 1990s, and this decrease accelerated in 2007.

Hunter said, “I do think that society unjustly judges our generation. Stereotypes are inappropriately placed on every generation, and ours is certainly not an exception. The stereotype that all of today’s teenagers are glued to their phones and are unwilling to take risks is not true for everyone and gives others an image of us being lazy or superficial. Overall, I think that stereotypes of all kinds are hurtful, put people in boxes, and give space for people to judge others without personally knowing them.”

However, Author of “iGen: Why Today’s Super-Connected Kids are Growing Up Less Rebellious, More Tolerant, Less Happy — and Completely Unprepared for Adulthood,” Jean M. Twenge, argues that today’s teens are becoming adults less quickly as her “research suggests today’s 18-year-old more closely resembles a 15-year-old of the 1970s or ’80s.”

Yet, shouldn’t someone’s preparedness for “adultism” be determined not by how many dates someone has been on, but education and political awareness? Pew Research Center states Gen Z will be the most educated generation yet as “they are less likely to drop out of high school and more likely to be enrolled in college.”

HKS's researchers find the single biggest lesson from their survey is that political polarization has handicapped America's response to #COVID19 at virtually every level https://t.co/2gZwrfpgW4

Beyond this, Gen Z has the potential to bring about solutions to issues which have haunted their daily lives and decrease the political polarization that, as “The Social Dilemma” points out, could eventually lead to a civil war. There has been an increase of counties, between 1992 and 2016, “where presidential candidates won the two-party popular vote by more than 20 percentage points,” meaning less of an in between.

Despite social media, Gen Zers’ beliefs are more homogenous regarding major issues such as climate change as they “are more likely than their older counterparts to say the earth is getting warmer due to human activity.” In addition, Gen Zers are more likely to state that Blacks are at a disadvantage than Whites in the U.S., which is in alignment with the overwhelming support for the Black Lives Matter movement among young people. It is also important to note that Gen Zers who identify with the Republican Party also differ in their opinions regarding race and climate change than older generations as well. Lastly, nearly half of Gen Zers view same-sex and interracial marriage as beneficial for society.

Emma Elder (‘21) said, “I definitely think that Gen Z’s similar views and perspectives has the potential to solve major issues mainly because I feel like we almost have a collective understanding of the need for equality in our nation and a decrease in harsh judgements towards types of relationships, genders, and races. Due to this, I believe our united viewpoint definitely has the potential to lessen the discrimination and political disagreements that are common in the nation right now.”

Although Gen Z is in part damaged, this generation’s diversity in race and ethnicity and its similar views regarding equality, acceptance, and climate change overshadows this. Gen Z is not society’s Pandora’s box but rather — its saving grace.