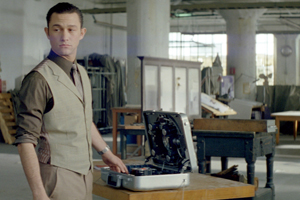 Summer 2010 movies hit hard with several franchise sequels (Iron Man 2, The Twilight Saga: Eclipse), cult classic remakes (A Nightmare on Elm Street) and the film that dominated the entire box office and left everyone in the Western civilization scratching their heads- Inception.

Summer releases are always the most sought after in Hollywood.  Fall and winter are the holiday and Oscar buzz-worthy film release seasons, while spring is more directed towards “rom-coms” and children movies, leaving summer as the ultimate cash crop season for the mega stars and mega franchises. Everyone wants a summer release, and 2010 did not disappoint.

It’s best to start out with the earliest release and probably the most disappointing film of the summer- the movie that every horror fan knew would never live up to expectations but still went to see: A Nightmare on Elm Street. While I will admit it was a cut above the regular slasher films Hollywood heavy weights such as the Saw creators and Eli Roth’s mutant brain-child Hostel tend to deliver, the original Elm Street was famous for one reason: Robert England.

England gave the character of Freddy Kruger- a child molester burned alive by the parents of the neighborhood who, decades later, in some sort of post-mortem spirit form haunts and kills the children (now teenagers) in their- wait for it- dreams. Yeah. This is the film that started them all. The original was campy and corny, with scary but ultimately eye-roll worthy special effects, but that’s what made it such a cult classic.

The new, re-vamped version features much more brooding performances by the young actors, although credit should be given where credit is due for their performances, it is not what fans of the classic wanted: they wanted a fun, terrifying Freddy. Jackie Earle Haley (who was a phenomenal choice for Freddy as he had already shown his worthy chomps by having played a child molester in Little Children) plays creepy where England played silly, strong where England played camp. His face is more melted flesh rather than the infamous twisted features of the original Freddy, and his torture tactics are that much more brutal. All in all, Rotten Tomatoes gave this re-released horror an undeserved 13% for delivering a great eye-candy horror film, but lacking in the spark the original had.

Iron Man stepped onto the scene like a breath of fresh air for action movies by 1) not being directed by Michael Bay, and 2) having an original, funny anti-hero as the protagonist. I, personally, am not an action-flick type of girl. I could close my eyes throughout most of them and would miss none of the plot line, mainly because most don’t really have one (I’m talking to you, Casino Royal), but Iron Man was entertaining with Downey as a snarky bad boy with a serious God-complex who becomes fatally injured until some sort of device is placed into his chest to keep him alive. This life crisis leads to his constructing an entire suit essentially built around this device to fight crime. I’m sure it makes more sense in the comic book form.

Iron Man 2, on the other hand, feels exactly like the name: the same movie, only slightly less interesting. Even so, Moviefone says the film went on to gross more than $312 million. Sure, the explosions are bigger, the bad guys badder and Scarlett Johansson’s a redhead- what’s not to like? Sequels are just so typical in Hollywood that the producers know people will watch them, so it seems like they are not trying as hard the second time around. Rotten Tomatoes gives this movie a surprising 74%; it might have been a rather good sequel, but Iron Man 2 is still a sequel nonetheless.

I know girls will either skip this specific paragraph or specifically skip to it- The Twilight Saga: Eclipse. Love it or hate it, Twilight fever is staying (having earned $298 million at the box office, according to Moviefone) and I personally am glad for it because the movies are getting better and better. Each director brought a different feel to each film: Twilight was indie and shaky (literally, with Catherine Hardwicke’s overuse of the moody, angsty hand-held camera).

New Moon was commercial and glossy with Chris Weitz’s heavy sephora coloring, and the action director of 28 Days, David Slade, brought a newfound darkness to Eclipse. Robert Pattison is even more painfully beautiful as Edward, Taylor Lautner cannot move his neck because the poor boy is so overly muscular and Kristen Stewart is still shy and awkward in an expected, socially acceptable way.

The film looks and feels even heavier than the other two as Bella’s decision to remain human or stay eternally tied to her undead boyfriend by turning into a vampire becomes that much more heated as Jacob professes his love for her. While the kissing, the fighting and the staring goes on, one watches with bated breath. But the moment a character opens their mouth to speak in the movie, you instantly regret dragging your non-Twilight fan friend to watch this with you, as you know they will undoubtedly make fun of you for liking this. Just like the book, the script’s lines are deplorable and laughable. No wonder Kristen’s acting looks wooden, she’s reduced to mumbling the line “wow, it’s so pretty” an embarrassing three times. Final Tomato rating: 51%, which makes perfect sense, as this is a movie you either love to hate or hate to love.

The trailers were awe-inspiring with scenes of abandoned buildings by the shore and cities folding in on themselves. The score was powerful and haunting. Inception, before it became this generation’s Sixth Sense, had everyone saying “I have no idea what that movie is about… but I want to see it.” Christopher Nolan, the genius behind Dark Knight, somehow managed to get an intellectual mind-freak of a movie to be a smash hit in a season full of mindless sequels and action movies.

The New York Times feature, “Lessons of the Summer Box Office,” quotes Dan Fellman, President of Distribution at Warner Brothers, “Everybody looked at us and said, ‘Why are you releasing a movie this smart in the middle of July?”  Replied Fellman. “Guess what? The summer isn’t just for dopes.”

Attempting to explaining this film’s complex storyline will sound more like drivel than anything else, but essentially it is about a group of “mind invaders” led by Cobb (Leonardo Decaprio) who hunt out aspects of a target’s mind to unlock secrets their corporation is searching for. Things go haywire, though, when the group is taken into Cobb’s own mind, a place of guilt and danger.

The film went on to gross more than $660 million at the box office, mainly because people ended up watching this flick two or three times, trying to work out exactly what was going on. Everything falls into place beautifully with this film – the acting is superb, the writing phenomenal, the cinematography and directing could not be better. What stands out, of course, is the plot (and the scene where Joseph Gordon-Levitt fights a bad guy in a spinning hotel hallway — Cinematic Genius!).  The “is this a dream?” idea has been done, but Nolan leads his cast fearlessly down a new branch of that path, mixing artsy and commercial seamlessly.

People who didn’t understand the film still enjoyed the trip and those who did, appreciated Hollywood letting this film pass with an ending that doesn’t tie up every loose end into a perfect bow for the audience. Just ask yourself this: do you believe the top continues to spin or does it stop? If you don’t understand the question, go watch Inception.  Rotten Tomatoes gives Inception a well deserved 87% for an innovative and surprising summer hit.

While the films with actual substance were few and far between, 2010 was a summer of pure enjoyment at the movies, which- for summer – is all anyone really expects. It is getting harder for summer movies to shock the general public – the sequels tend to be lackluster and stale, and action movies are mind numbing. This summer stands out exactly for that reason: while Iron Man 2 and Eclipse will not be winning any awards at the Oscars this year, they were entertaining and simply fun to watch, giving us – at the very least- characters we care about. Nightmare on Elm Street is an acquired taste, similarly to the original. And Inception proved that Hollywood can still make good films.