Fox hit ‘Glee’ is at a crossroads 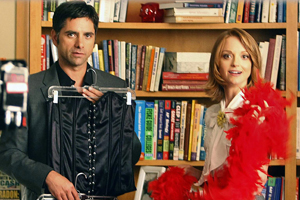 Ann Powers, LA Times (MCT)
If a musical is ever made about Ryan Murphy and his amazing Technicolor cast creating “Glee,” the big climax at the end of the first act should correspond to this particular moment in time.

The show has reached a peak, in terms of popularity and artistic ambition. In the last two weeks it’s tackled two of the most controversial subjects of our time: religion and Britney Spears. The ratings are through the roof, the iTunes downloads just keep coming, and celebrities such as Amy Adams, Javier Bardem and future guest star Gwyneth Paltrow have all publicly expressed their enthusiasm for “Glee.”

Like Rachel Berry (played by actress Lea Michele), the show’s would-be Streisand who, musically at any rate, is the central character in this ensemble show, “Glee” is also wildly ambitious and earnest about what the lively arts can accomplish. If Murphy and his team had done nothing more than create a viable television series employing the structure of musical theater, that would have been enough; it’s never really happened before in prime time. (“Cop Rock,” no; and “The Singing Detective” hailed from the tony BBC.)

But “Glee” has gone further, using the softening agents of song and shticky humor to take a strongly left-leaning stance on issues including teen pregnancy, abstinence, gay visibility and the rights of the disabled. Grabbing huge audiences with these plotlines — not to mention its fundamental role as a cheerleader (pun intended!) for arts in the schools — it’s a potent pop-cultural force in opposition to the rightward push of that other pop phenomenon of the moment, the Tea Party movement.

So, as Rachel might have sung in this week’s Joan Osborne-honoring episode: Yeah, yeah, “Glee” is great. But in that fantasy musical about the show’s rise, we’d be at the beginning of the second act right now — the point in the plot where things get more complicated.

So far this season, reviews have been mixed. The season opener was a plot-pusher, with download-courting but thematically pointless song choices such as the group rendition of “Empire State of Mind,” serving “Glee’s” function as, to quote Daily Beast commentator Jace Lacob, “a singles delivery system.”

The much-hyped Britney Spears-themed episode made clear that “Glee” watchers split into two camps: those who want a classic book-musical approach, with each song advancing the plot, and those in it for the more contemporary gratification of video re-creations and cover songs easily imitated on YouTube. Most recently, the God-in-a-sandwich musings of “Grilled Cheesus” in Tuesday’s episode caused some to cry “too serious,” even as others lauded its respectfulness toward spiritual diversity.

Behind these quibbles lie the questions that “Glee” must face as it moves beyond its impact as a novelty. How can it serve both the viewers who love its uplift and classic feel stemming from its musical theater roots, and those who love what scholar Christine Bacareza Balance has called its “karaoke aesthetics” — the “unabashedly public singing and unapologetic cover versioning” that connects it to the music of right now?

Connected to that formal issue is one related to the show’s approach to characters. How can it revel in stereotypes, tapping into the broad humor of vaudeville, and yet move beyond them to do what television must ultimately do: present characters that viewers feel could be their friends?

The answer, I think, lies in a strong focus on the very contemporary pop-soul of “Glee.” Like much of today’s mainstream music, “Glee” is a hybrid: a mix of different approaches and historically unbound sounds. As it continues to refine the balance among its key elements, “Glee” can evolve into an enduring hit that, like other medium-advancing programs from “All in the Family” to “Lost,” actually broadens the possibilities of television itself.

Musically, “Glee” is mostly three things. It’s a twist on the book musical, using songs the way shows like “Oklahoma” or “Billy Elliot” do, to uncover the beating hearts of its stock characters and, periodically, to explosively propel the plot. Second, it updates the legacy of the cover band to suit the age of YouTube — it’s no accident that Charice Pempengco, one of the newest cast members, found her initial fame through that democratizing medium. And finally, it’s a celebration of the amateur voice, from show choir to the local bowling-alley lounge to the iPhone “Glee” karaoke app that brings the viewer into the experience.

Right now, “Glee” is showing the strain of reconciling its musical-theater side with its more contemporary elements, and not only in the weakly integrated numbers by breakout star Michele, who for all her talent sometimes literally stops the show. Most urgently, “Glee” needs to continue to refine its attitude toward stereotypes. Caricatures like Rachel’s Jewish-American princess, Kurt’s (Chris Colfer’s) “nelly” gay boy or the mannish women coaches Sue Sylvester (Jane Lynch) and Shannon Beiste (Dot Jones) relate to this history — one that goes all the way back to minstrelsy, the knotty root of all American pop.

One function of musical theater has been to defuse the tensions of prejudice by making us laugh at the grotesques we create under its influence. “Glee” does this consistently and well. But with characters like Jacob Ben-Israel (Josh Sussman), the arguably anti-Semitic embodiment of Portnoy’s complaint, or the infertile shrew turned vengeful ex-wife Terri (Jessalyn Gilsig), the satire festers. This happens partly because “Glee” is not an old-fashioned musical: it’s a series, and we trust that its characters will grow, at least incrementally.

Music can solve this problem. “Simple characters in a musical book can be full and memorable because they have the richness of music, song and dance to make them alive in performance,” writes Richard Kislan in his history of the musical-theater form. That’s happened, sometimes in predictable ways, with characters like the African-American baby diva Mercedes (Amber Riley) and the as-yet silent “other Asian” Mike Chang (Harry Shum Jr.), who expresses himself through dance.

At the same time, “Glee” can tap into those other key elements in its makeup — the cover-band strain and the karaoke gene — to remind viewers how music affects and even transforms their own lives. The critic J.D. Considine has written that “Glee” reminds us that songs “belong to anyone, from fictional high school kids on TV to those at home watching and singing along.”

This aspect of the show can’t be stressed enough. Whatever “Glee” says about social mores, its key message is that music connects us, helps explain one person to another, and opens us up to grief or love. “We have to carry each other,” sang the “Glee” kids last season, covering U2’s “One,” a song that demonstrates compassion musically. “Glee” shows how we do that, every time its characters carry a tune.