Iconic Holmes gets a modern-day shift on PBS 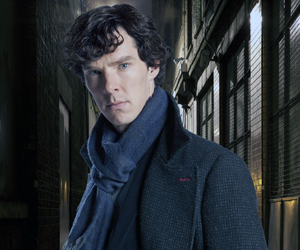 So, what does PBS do to make the character feel original in yet another TV program? The answer is elementary, my dear Watson: modernize the Baker Street sleuth.

“I think for any actor to play an iconic character, there’s a huge pressure that’s associated with delivering something that everyone knows culturally,” says Benedict Cumberbatch, who plays the modern-day Holmes in “Sherlock,” which airs Sunday. “But there is an element of a blank canvas because of this brilliant reinvention and reinvigoration of him being a 21st century hero.”

This latest version of the Sir Arthur Conan Doyle character comes from a couple of guys who know how to upgrade a popular character: Steven Moffat and Mark Gatiss, the men behind the latest incarnation of “Dr. Who.”

“When they were first working on ‘Dr. Who’ in the early ’60s they actually consciously patterned some of the doctor’s characteristics after Sherlock Holmes,” says Moffat. “They both have that sort of great Edwardian adventurer thing going on. The truth is they’re actually almost opposites. I kind of think of the doctor as being a lot more human in a strange way because the Doctor is like an angel who aspires to humanity. Sherlock Holmes is like a human being who aspires to being a god.”

That became the bases for his modern Holmes. Moffat wanted to make him a person — no matter how mad or alarming he might seem — would always be perfectly comfortable in his own skin. He describes Holmes as being “unrepentant.”

Putting Holmes in a technologically advanced world wasn’t a stretch. Every version of Holmes has had the great detective embrace the technology of that time period.

There were a few Holmes characteristics that proved more challenging, such as what to do with his drug addiction. The series creators agree that part of the Holmes mythology has been wildly changed from the original, where the detective would never indulge in drugs when on a case but rather out of boredom.

Their solution was to make this modern Holmes seem like he could drift over to the dark side if the time was right.

It appears the producers made the right moves: The Sherlock Holmes Society of London gave them their blessing.