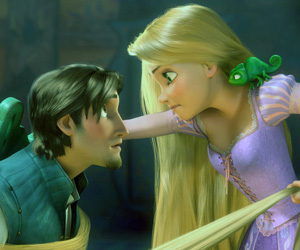 LOS ANGELES — After nearly a decade of being overshadowed by Pixar and DreamWorks, Disney Animation Studios has found its box office dream come true.

“Tangled,” the six-years-in-the-making 3-D animated feature based on the Rapunzel fable, opened to a strong $69 million over the five-day Thanksgiving weekend. That makes it the first out-of-the-gate hit in more than a decade for the storied Burbank animation house, which has suffered through a string of disappointments and flops in recent years.

It easily topped a trio of other new films that all had soft openings, according to studio estimates. The Christina Aguilera-Cher musical “Burlesque” did the best of the three, launching to $17.2 million over five days, but it was also the most expensive to produce. The Jake Gyllenhaal-Anne Hathaway romantic drama “Love & Other Drugs” started with $14 million, while the Dwayne Johnson action flick “Faster” took in $12.2 million.

“Harry Potter and the Deathly Hallows — Part 1” was No. 1 at the box office again, as expected. However, its $76.2 million five-day take was less than that of 2005’s “Harry Potterand the Goblet of Fire,” despite five years of ticket price inflation. Although data suggests interest may be waning faster than previous “Potter” sequels, “Deathly Hallows” has nevertheless tallied an impressive domestic total of $220.4 million, making it yet another success in the series.

Meanwhile, the latest Potter sequel also brought in another $113.2 million overseas this weekend, including a strong opening in France, boosting its foreign gross to a sensational$389.2 million.

Despite its robust opening, “Tangled” still may struggle to turn a profit — six years in production caused the movie’s final cost to balloon to more than $260 million. Still, the strong opening provides a much needed boost to Disney Animation and demonstrates that it can open a nonsequel as well as Pixar or DreamWorks.

Since changing the film’s title from “Rapunzel” earlier this year, Disney crafted “Tangled’s” advertising to appeal to boys in hopes of avoiding the “girls-only” trap of last year’s disappointment “The Princess and the Frog.” While the studio clearly succeeded in making the film a close No. 2 pick for families after “Potter,” its audience was still primarily moms and daughters, with 61 percent of attendees female, according to exit polls. There were simply lots of them.

Some at Disney had feared “Tangled” would get lost opening just five days after “Deathly Hallows,” but the movie’s biggest ally appears to have been word-of-mouth from early screenings. Audiences gave it an average grade of A plus, according to market research firm CinemaScore, the first picture this year to get that top score.

“We knew this was a great date but at first we weren’t sure how to get out of the shadow of ‘Potter,’ ” said Disney distribution president Chuck Viane. “Luckily we had a tool that worked really well for advertising, which is the film itself.”

With such lively word-of-mouth, “Tangled” will likely finish its domestic run with at least $200 million. Prospects are also good overseas, where the 3-D film enjoyed solid if not huge starts in a few countries, particularly Russia, where it took in $7.5 million.

“Burlesque” overcame withering reviews to generate good buzz among its mostly female crowds and earned a CinemaScore of A minus. Still, the movie cost $55 million and was aggressively advertised, including product placement on the finale of “Dancing With the Stars” last week, thus making its $17.2million start far from impressive.

Sony Pictures distribution president Rory Bruer said he was satisfied with the launch and predicted it would play well in coming weeks and overseas. The musical romance is one of the most expensive movies to date from Sony’s Screen Gems label, which typically focuses on less costly horror film and thrillers.

20th Century Fox knew “Love & Other Drugs” was unlikely to garner a big opening given the stiff competition for female moviegoers from “Burlesque” and “Tangled.” The film’s CinemaScore won’t help — it came in at a not-too-hot B minus. But Fox executive vice president of domestic distribution Chris Aronson noted that moviegoers under 25 gave it a B plus, indicating buzz could be better in that age group.

Fox and its financing partner Regency spent $30 million to make “Love & Other Drugs.”

CBS Films had hoped that with “Faster,” its third release, it would find its first hit by appealing to men on a weekend full of female-centric movies. But the R-rated action film had the slowest start of any new picture. Still, it cost CBS and its partner Sony Pictures only $24 million to make, meaning it’s far from a financial disaster.

“Faster” did particularly well with Latino and African-American moviegoers, who together made up an estimated 61 percent of its audience.

Several returning movies besides “Harry Potter” enjoyed healthy showings over Thanksgiving. Most notably, the Denzel Washington-Chris Pine thriller “Unstoppable” lived up to its name, with ticket sales down only 10 percent for the three-day weekend.