TV spreads holiday cheer with a blizzard of movies, specials 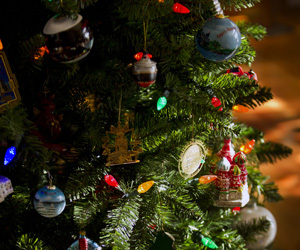 Deck the halls and warm up the DVR. A veritable blizzard of holiday-themed fare is about to blow into your television sets.

Yes, once again the broadcast networks and cable channels have pieced together a vast lineup of festive specials, movies and animated treats. Some are making their debut this season, but most are perennial favorites that continue to enchant us.

So we’ve made a list (and checked it twice) of prime time’s main holiday highlights. Keep in mind that many of these programs — especially those on cable — will receive multiple airings.

—The Holiday Hall of Fame

“A Charlie Brown Christmas”: Our round-headed hero bonds with a puny tree and learns the true meaning of Christmas. (8 p.m. Dec. 7 & 16, ABC).

“The Year Without a Santa Claus”: The big guy gets his feelings hurt and decides to go on strike. (9 p.m. Dec. 9, ABC Family).

“The Flight Before Christmas”: A young reindeer yearns to be an expert flyer just like his father. (9 p.m. Dec. 11, CBS).

“A Christmas Story”: We triple-dog dare you to watch this nostalgic keepsake over and over and over. (Marathon starts at 8 p.m. Dec. 24, TBS).

“Scrooged”: Bill Murray goes for the laughs in a modern twist on the flinty grouch. (Marathon starts 10 a.m. Dec. 25, AMC).

“A Very School Gyrls Holla-Day”: The girls find themselves locked in the mall after it closes and try to stop a pair of unlikely thieves on Christmas. (9 p.m. Dec. 4, Nickelodeon).

“On Strike for Christmas”: Daphne Zuniga stars as a fed-up mom who tires of toiling around the holidays. (8 p.m. Dec. 5, Lifetime Movie Network ).

“The Santa Incident”: After Santa’s sleigh is downed by a heat-seeking missile, a family nurses him back to health. (8 p.m. Dec. 7, Hallmark Channel).

“An Old-Fashioned Christmas”: Jacqueline Bisset stars in this saga based on a short story by Louisa May Alcott. (8 p.m. Dec. 11, Hallmark Channel).

“Penguins of Madagascar: The All-Nighter Before Christmas”: The zoo-dwellers discover the truth behind Santa’s magic in this new animated special. (7 p.m. Dec. 12,Nickelodeon).

Visit the Contra Costa Times on the Web at http://www.contracostatimes.com.