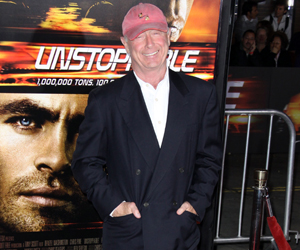 LOS ANGELES — “Unstoppable” is as good as its name. A runaway train drama that never slows down, it fashions familiarity into a virtue and shows why old-school professionalism never goes out of style.

With action auteur Tony Scott directing, “Unstoppable” certainly features a lot that we’ve seen before, from its vehicle-from-hell format to its venerable advertising line: “1,000,000 Tons, 100,000 Lives, 100 Minutes.” Yes, they still do make them that way.

This is also the second consecutive Scott film (after the underappreciated “The Taking of Pelham 123”) involving a train and the sixth of his career to star Denzel Washington, here sharing the screen with “Star Trek’s” Chris Pine and one very out of control locomotive. But while continually doing the same kind of movie might anesthetize some directors, it energizes Scott, who has gotten better and better at building and sustaining traditional kinds of tension.

Working with veteran colleagues including production designer Chris Seagers and editor Chris Lebenzon (who shares credit with Robert Duffy) and new teammates such as cinematographerBen Seresin, Scott likes nothing better than filling the screen with movement, whether it be darting helicopters, police cruisers with sirens flashing or trains with minds of their own.

More than that, in an age when CGI images are second nature, Scott prefers practical effects. He clearly enjoys having real people involved in real stunts and crashes, even getting Washington and Pine to put in some time on the top of that moving locomotive (though the heaviest lifting was done by expert stuntmen Clay Donahue Fontenot and Daniel Stevens).

Scott and company have also made that runaway train, AWVR locomotive 777, look and sound as fearsome as one of those dinosaurs from “Jurassic Park.” Painted bright red with an electric yellow stripe and a yellow and black cowcatcher in front, this is one formidable locomotive.

Written by Mark Bomback with a fine sense of potential mayhem around the next curve, “Unstoppable” is obviously not the place to go for Oscar-winning drama, but by casting top-flight performers across the board the film gets the most out of the “inspired by true events” pandemonium it creates.

Before we so much as see a train we meet Will Colson (Pine), a young man in a Pennsylvania town unhappily sleeping on his brother’s sofa because of some unspecified marital difficulties we will learn all about before the final credits roll.

Colson is a newly minted conductor with four months’ experience on the AWVR railway and his arrival on the job is viewed with suspicion by older heads. However Colson’s partner for the day, veteran “28 years on the line” engineer Frank Barnes (Washington) may be hard but he’s fair.

“I only have one rule,” Barnes says. “Do it right, and if you don’t know, ask.” (OK, that’s two rules, but who’s quibbling?) Barnes also believes “if you make a mistake in training they give you an F, out here you get killed,” which is a difficult argument to refute.

These men try to establish a working relationship in their cab while dealing with personal issues (Colson is concerned about his estranged wife, Barnes about a pair of feisty grown daughters). Then the scene shifts to another train yard elsewhere in Pennsylvania.

There an overweight, slovenly sort named Dewey (a dead-on Ethan Suplee), a guy who screams ineptitude the moment he walks on the scene, screws up in a major way. Attempting to cut corners while moving engine 777 and its 39 cars, he leaves the train unattended and watches in slacker horror as the beast picks up speed and heads on down the track.

Even more upset than Dewey is Connie Hooper. Well-played by Rosario Dawson, Hooper is the no-nonsense individual who runs the rail yard, and she’s not happy to discover what she thinks is “a coaster,” a train without power, heading out of her area.

As if. It turns out that the beastly 777 is not only gearing up for a full-power speed it’s chock full of some of the most toxic chemicals known to man, “a missile the size of the Chrysler building” someone hyperbolically insists, that just happens to be headed toward the kind of highly populated areas it would be a shame to decimate.

Most of “Unstoppable” involves attempts by various railroad personnel to make a liar out of the title and stop the train. There are waves of crucial split-second decisions, tense moments without number and even a handful of non-catastrophic collisions calculated to keep us in our seats until Colson and Barnes decide that, hey, maybe we can stop this thing.

Once upon a time movies like this, highly professional entertainments made with enough substance to keep adults involved, were a staple of the studio system, but the relative lack of interest in “Pelham 123” has brought that into question. Old fashioned action epics like “Unstoppable” may not be the future of the movie business, but it would be a shame if they were no more than its storied past.

MPAA rating: PG:13 for sequences of action and peril, and some language