The good, the bad and the ugly of Oscar speeches 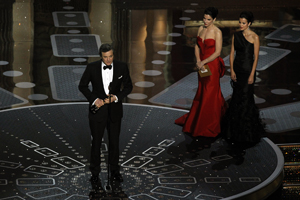 LOS ANGELES — It may be common knowledge, but the 2011 Oscars proved it beyond a doubt: The reason we watch the show is as much to hear what the winners say as to find out who actually won.

In a year without a single genuine surprise in terms of who took home what, the only thing not known in advance was how the dazed champions would respond in the moment. If anyone predicted that Melissa Leo would wake up the world by being the first person in Oscar telecast history to use a particular forbidden word, I didn’t see it.

Oscar night is the only time that movieland titans can be counted on to pay attention to what other people in the room are saying. And the evening provides the kind of unrehearsed, genuinely human moments that are increasingly rare in our highly packaged, image-savvy age.

So in the aftermath of a night when, courtesy of best picture winner “The King’s Speech,” thoughts about language predominated, it seems appropriate to examine what worked and what didn’t in terms of on-air, off-the-cuff acceptances. Kids, if you’re planning your future Oscar speeches at home, this might be a good place to start.

First, being self-deprecating always, always works. Who doesn’t appreciate Colin Firth saying “I have a feeling my career just peaked” as he accepts his lead actor award? Original song winner Randy Newman has practically made an art form out of this, noting that with two victories out of 20 nominations, “my percentages aren’t great.” That fruitless nomination total is so high, he quipped, “they have a Randy Newman chicken by this time” at the annual nominees lunch.

It also reflects well on a winner to pay artful tribute to mentors and idols. Aaron Sorkin, winner for adapted screenplay, began his speech with a nod to the great Paddy Chayefsky. And in a year when “Inception” director Christopher Nolan was shockingly not even nominated, it was heartening to hear the film’s winners in four other categories speak so stirringly about him. Wittiest of all, “The Wolfman” makeup co-winner Dave Elsey acknowledged his legendary collaborator by saying, “It was always my ambition to lose an Oscar to Rick Baker. This is much better.”

Politics, usually an Oscar no-no, are OK to reference when done deftly. It’s unlikely that the “Inception” winners who talked pointedly about their union crews would have done so if not for the current fracas in Wisconsin. And it was good to hear Charles Ferguson, the forthright director of the winning documentary, “Inside Job,” talk about the fraud that led to the recent economic meltdown and complain, “Not a single financial executive has gone to jail, and that’s wrong.”

Lists of names are a perennial dead zone at these events, and with good reason. Every time someone pulled out a tattered piece of paper and thanked agents and managers, you could feel the entire telecast grinding to a halt.

Only two people managed to reel off names and make it work. One was lead actress winner Natalie Portman, in the business since she was 11, who made a point of mentioning “people on films that no one ever talks about,” like hair and makeup, the first assistant director and the camera operator. The other was the redoubtable Newman, who artfully moaned before his list, “I want to be good television so badly …. I’ve been on this show any number of times, and I’ve slowed it down almost every time.”

On the other hand, mentioning those closest to you is most effective if there’s a specific reason to do so. Tom Hooper, who took home the top director honors, credited his mother for having discovered “The King’s Speech” at a fringe theater play reading. And David Seidler, the 73-year-old who wrote the script, said, “My father always said to me I would be a late bloomer.” Almost every winner thanked a life partner, but no one did it more eloquently than supporting actor winner Christian Bale, who called his wife “my mast through the storms of life.”

If there is one overall key to being successful when you accept, it’s to be natural and be yourself. That’s what “Alice in Wonderland” art director Robert Stromberg did when he said, “Why didn’t I lose that 20 pounds?” And that’s what mop-topped live action-short winner Luke Matheny did when he blurted out, “I should have gotten a haircut,” then thanked his mom for handling “craft services.”

Being natural was what Leo was when she ventured into the vernacular and what Newman was when he moaned about his miserable percentages. Newman is so good at this, in fact, that it makes you wish he’d won all those other times just so we could have heard what he had to say.