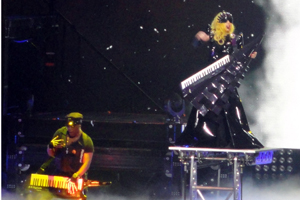 Have you ever watched a Taylor Swift music video about a conventional love story? What about one of Lady Gaga’s imaginative, perplexing, and bizarre videos? Although  difficult for many to believe, these artists are both from the modern era of music. While some people of previous generations may feel that all contemporary music sounds exactly the same, this assertion is far from the truth.

Although some traditional artists, such as Beyonce , Taylor Swift  and Adele, prefer to use standard methods to create appeal for themselves, outrageous artists, including Lady Gaga, Nicki Minaj , Rihanna  and Britney Spears, employ a shock factor to garner attention from the media and public audiences. However, the big question is, has one of these particular styles significantly impacted the music industry more than the other?

Despite the fact that differences between image and musical style of artists may be tremendous, various people enjoy listening to distinct types of music. Some Academy students stated that they did not have a specific preference for either style.

Josie Little emphasized that outrageous artists are beneficial to the music industry in being “willing to break the mold”, but that “traditional, uplifting music is also nice to listen to”, also stating her point of view that artists like Beyonce have a firm grasp on the entertainment industry because of the quality of her music instead of continued prominence of her public image.

Another student, Katelyn Smith, realizes that an artist’s image makes a huge contribution to the success of that artist, but simply enjoys the music of all types of artists rather than dwelling on which one is superior in her mind, while Marigloria Maldonado does not find appeal in the intimidating image of several bewildering artists. However, regardless of the manner in which an artist might attract the attention of the public, one factor is generally agreed upon as an admired quality of either type of artist: true talent. Because appalling stunts may only magnetize attention for so long, artists gain appreciation and positive critical reception for exhibition of their natural musical abilities, which unfortunately, some triumphant artists fail to possess.

Although the vocal abilities of popular shocking artists such as Britney Spears and Katy Perry remain questionable, they have nonetheless acquired monumental success, demonstrating that an artist may not necessarily have an exceptional musical aptitude in order to gain fame. However, regardless of their approaches to capturing interest, the one factor that Beyonce, Taylor Swift, Adele and Lady Gaga all have in common is that they have indisputably gifted songwriting and singing capabilities. In the long run, this aspect will serve to hold them in a higher place of esteem than some of the other, less talented artists.

So, are wild and unpredictable artists or the more readily accepted and conventional artists more significant? The answer to this question is that they are equally important to society, despite differences in appearance or style. Music cannot consist of uniform and homogenous compositions in order to flourish and must welcome dissimilarities between its pioneers for the purpose of thriving. Even Beyonce and Lady Gaga themselves have embraced this concept by collaborating on two records, both of which gained favorable airplay. The music industry will indubitably continue to prosper with the arrival of new artists as long as a wide variety of musical and inventive styles accompanies them.