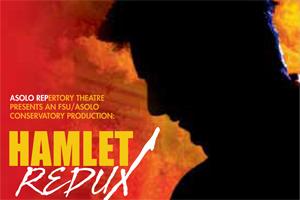 Academy students had waited all week to see FSU/Asolo Repertory Theater Company perform Hamlet Redux, a modern interpretation of the Shakespearean play. By the performance day, October 7, students already had fixed expectations about the play, having seen the company’s modern version of  Antigone  last year. Seniors and sophomores who had studied the play found their interpretation of Antigone to be rather abstract and somewhat disturbing in its depiction of Antigone’s death and drug habit, the latter of which is completely absent from Sophocles’ original work.

Hamlet Redux did not fail to disappoint students with an unorthodox portrayal of the classic tale of vengeance. In the play, Hamlet, a prince of Denmark, discovers a troubling secret through the ghost of his father: King Hamlet had been murdered at the hands of Hamlet’s uncle and now demands revenge from his son. Hamlet sets out to do just that. The Asolo Company stayed true to the original plot but performed it in an unusual way. In their interpretation, a woman played the part of Hamlet. At times, this made the romantic scenes between Hamlet and Ophelia uncomfortable for the audience to watch. Said Academy senior Gaby Bou, “It was kind of awkward.”

However, Bayshore player Jenn Compton said, “Because this is a girls school, we have had girls playing guys before in some of our productions, but perhaps not as romantically attached as Hamlet and Ophelia.” Many students found other positive aspects in the play.

Senior Katie Elliott added, “Katie Cunningham, the girls who played Hamlet, impressed me the most. She had the difficult role of playing a boy. Not only did she have to adopt the role of the opposite gender, but she had to play the complex character of Hamlet. I think she did a fantastic job and really revealed parts of Hamlet’s personality that I didn’t even catch on to while reading the play.”

Students appreciated the creative motifs. In the Q&A session, they remarked that the chorus was an interesting addition that relayed the characters’ inner thoughts. The slow-motion movements that varied between the comical and the dramatic were also a crowd pleaser. Students admired the seamless way in which some characters played multiple roles. Mary Green noted  the fact that “the players made an effective use of their resources with only five actors.”

On the whole, students enjoyed the actor-audience interaction that occurred at the end of the play, in which the performers and the students were able to ask each other questions. “It was really cool to find out about the life of a professional actor,” said senior Marigloria Maldonado.

Some students even took interesting techniques away from the one-act play.  Cristina Gomez remarked, “The actors from this stage production utilized many innovative stage techniques that would be interesting to try here at the Academy. For example, actors that were not physically involved in the the dialogue sat in the background facing away from the audience instead of exiting off the stage. Bayshore Players could try to implement this technique, and they could also use props as symbols like the actors of Hamlet Redux did.”

The Asolo performers ended the discussion by inviting the students to follow them on Facebook and offering them discounted tickets for their Sarasota shows.