Scream, shout, and let it all out- the truth behind fangirls 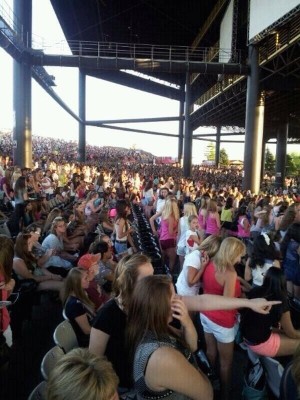 Thousands of fangirls await the start of a One Direction concert in Chicago over the summer.

Heart pounding, hands shaking, inability to form words. Believe it or not, these aren’t symptoms of a heart attack, but common physical ailments felt by those suffering from a deadly disease- fangirling. According to Urban Dictionary, a fangirl can be defined as “a rabid breed of human female who is obsessed with either a fictional character or someone in the entertainment industry.” And many more have been born due to the increased use of social media in today’s society.

Essentially, fangirls are on the extreme side of the Fan Spectrum. If they had the money, fangirls would go to every concert or meet-up available for the celebrity they adore. This celebrity could be anyone from Youtuber Tyler Oakley to boy band sensation One Direction. Through social media networks like Twitter, teenagers can talk to and locate their idols at any given moment, even to the point of stalking. In 140 characters, celebrities and teens alike can post onto Twitter for the world to see, making fangirling an easy international affair.

Publicity associate, fangirl expert, and social media extraordinaire Alexander Goldschmidt shared his thoughts on the phenomenon that is fangirling.

“Social media provides an unprecedented level of contact with the people fangirls idolize. Back when I was a teen, you really had no way to be ‘noticed.’ Nowadays, it’s all about getting a tweet or a favorite or some form of contact with your idol.”

Self-proclaimed fangirl, Mr. Goldschmidt is a large fan of celebrities such as Zac Efron, One Direction, and Fifth Harmony. He uses Twitter and Tumblr daily to stay updated on the latest news and stories about his many idols, all while connecting with other fangirls.

“It’s like a merit badge in Boy Scouts. Fangirls can stalk their idols, get a follow, get a selfie or more.”

Unfortunately, some fangirls almost take it too far, reporting on every move a celebrity makes and sharing it with the world. Others get aggressive if their idol does not acknowledge them or connect with their fans through social media very often. Mr. Goldschmidt warned about the dangers of social media in this situation.

“Because of this, some of the ‘crazier’ fangirls can develop a sense of closeness to their idols that is not real. They feel that their idols OWE them some form of recognition for their support. That’s when social media can cross a line.”

Although it is very helpful and brings communities together, it can be used to turn things against the celebrities and make them seem like the bad guys.

“People should be grateful for any contact they have with their idols via social media. All of this was impossible a decade ago.”

Despite the occasional hostile fan, the majority of fangirls are extremely personable and sweet. They will not bite when approached, but may express their undying love for their idol in a long string of incomprehensible words. Fangirls overall?

“It’s all very exciting and terrifying,” he shared.

To interact with a true expertise on fangirls, you can find Alex Goldschmidt on Twitter at @alexandergold or on Tumblr.