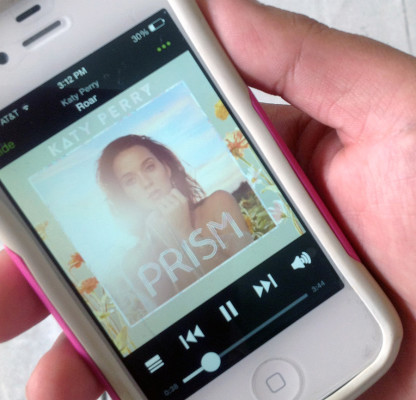 While you can't drive five minutes down Bayshore without hearing "Roar", Prism is worth the listen.

With the cool breeze refreshing the car through the wide open windows, you’re in a great mood driving home from school. What’s the best thing to put you in an excellent mood for the rest of the night? Why, it’s a new album by the one and only Katy Perry of course! Released October 22, Katy Perry’s newest album, Prism, seems like it ought to be a fun and lighthearted album. Now that the reviews have come out, did the album meet its high standards? Continue reading to see how the record faired with yours truly.

With the iconic and popular single, “Roar”,being released nearly two months prior to the full album, Katy Perry returned rather quickly to the top of the charts, topping the US Billboard Hot 100 and peaking at the top 10 of twenty-five countries. This energetic power pop song is one that is fun to listen to, blasting it while driving and singing along at the top of your lungs. The lyrics encourage you to be empowered and courageous, standing up for yourself and taking control of your own life. Whenever you have a bad day, singing Roar makes it difficult to keep a frown on your face. But with this much of a success on a single released so early, can the rest of the album live up to the expectations of Roar?

As soon as Katy Perry’s third studio album, Prism was available, I eagerly purchased and downloaded it on iTunes. I spent the rest of the night listening and critiquing each and every track. One massive difference between Prism and Perry’s previous album,Teenage Dream, can be seen in the maturity of the songs.

Like with all things, time moves on. People we love might let us down. Relationships with significant others decay. The invincible feeling you once had has turned into that of being naive or just plain hurt. In Prism, you can see that Perry has realized this. From her destroyed relationships she discovers that she is older, wiser, and much tougher. Prism trades the emphasis of partying as seen in Teenage Dream with the strength of spirituality.

Perry commented on the change, “When you lose something, all your foundations crumble- but that also leaves a big hole that’s open for something great to come through.”

Within Prism, specific songs tend to stand out in Perry’s strive to recreate herself as an inspirational idol, by using her relationship experience.

The passionate rush of “Love Me” reflects a deep inner change. Perry essentially reads off a laundry list of her previous failures in life before she declares, “I’m gonna love myself the way I want you to love me.”

“This Moment” holds the powerful carpe diem lyrics of, “Yesterday is history, so why don’t you be here with me?”

One of the more poignant songs, however, is the truly sentimental and eye-opening ballad of “By The Grace of God” where, after being heartbroken by Russell Brand, she has to physically pick herself up off the bathroom floor, look at herself in the mirror, and move on with her life for she sings that she, “…wasn’t gonna let love take me out that way.”

Katy Perry’s newest album received high ranking on my account, giving a nice range of fast dance songs to slow and meaningful ballads. Which song is your favorite off of the album? Let us know!