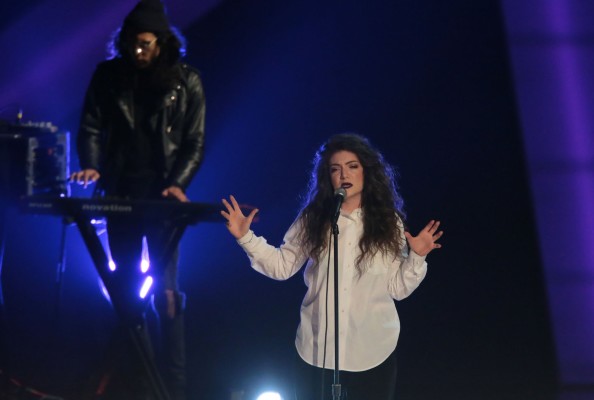 This Sunday night is the event the music industry anxiously awaits all year: the Grammys! Though there are clear front runners on occasion, the majority of the winners tend to be less predictable than the winners at other traditional award shows. This year artists such as Lorde and Macklemore & Ryan Lewis are almost guaranteed to take home awards, but categories where these artists are not nominated will be a little bit harder to predict. Taking this information into account, here are my 2014 Grammy predictions.

Record of the Year:

“Locked Out Of Heaven”- Bruno Mars

Who will win? Lorde’s “Royals” is the predicted winner. Due to some of the controversy  surrounding “Blurred Lines”, I think it’s safe to say it won’t take this award home. The remaining songs, while all stellar tracks, haven’t really taken the radio by storm this year the same way “Royals” has. Also, since Lorde was surprisingly snubbed in the best new artist category, I have a feeling voters will want her to win here.

Album of the Year:

Who will win? The safest bet is Macklemore & Ryan Lewis’ The Heist. Taylor Swift’s latest album isn’t really on par with her previous ones. The Blessed Unrest and Random Access Memories have both only had one single that was a mainstream hit, and I think many Grammy voters will overlook Kendrick Lamar’s Good Kid, M.A.A.D. City. This leaves The Heist as the most likely, due to its mainstream success and the fact that it was one of the most popular albums of the year.

Song of the Year:

Who will win? The major competition this year is between “Royals” and “Same Love”. Due to its message and the major steps our country has made towards marriage equality this year, “Same Love” has the upper hand, but I wouldn’t be too surprised if “Royals” won the award.

Who will win? Once again, Macklemore & Ryan Lewis are the safest bet. Their album sales have been great, and pretty much everyone knows “Thrift Shop”, “Same Love”, “White Walls”, and “Can’t Hold Us” by now. He has had four songs dominate the charts this year, which is impressive for any artist.

“When I Was Your Man”- Bruno Mars

Who will win? My predicted winner is “Mirrors”. Justin Timberlake is known for his extraordinary performance skills and was surprisingly overlooked in other major categories.

“Just Give Me A Reason”- Pink Featuring Nate Ruess

Who will win? I think “Just Give Me A Reason” is going to take home the Grammy. People love an emotional love song, and Nate Ruess’ band, Fun., did well at the Grammy’s last year, which I think gives this performance a slight advantage.

Who will win? “Holy Grail” is almost a guaranteed win. The Grammys love Jay Z. He has already won seventeen, and it’s a pretty good bet that he’ll be able to add this award to his already impressive collection.

Best Nothing Was The Same- Drake

Who will win? Normally I would give this award to Jay Z. However, since Good Kid, M.A.A.D City is also nominated for album of the year, I would say it’s most likely to win.

“Mine Would Be You”- Jessi Alexander, Connie Harrington & Deric Ruttan, songwriters (Blake Shelton)

Who will win? I’m going to predict that “Begin Again” will be the winner. Admittedly, I’m not a country music fan and don’t know most of these songs. However, I do know that Taylor Swift is a Grammy darling and think this is the category she is most likely to win this year.

Based On A True Story- Blake Shelton

Who will win? Once again I feel the need to say that I am in no way a country music expert. I predict Night Train will win, it is admittedly good album. Normally I would say Taylor Swift is the likely winner, but I feel that Red is the least “country” of her albums, and this will probably cost her in this category.

Music’s big night will take place this Sunday on CBS. Aside from the awards themselves, the night will have exciting performances from the likes of Jay Z and Beyonce, Daft Punk, Hunter Hayes, and (recently announced) Madonna.