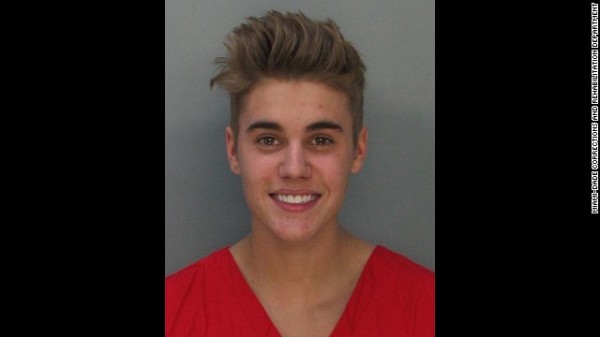 From a flop album and movie, to egging his neighbor’s house, to drug accusations you would think Justin Bieber has had enough negatives on his slate recently, but apparently not.  His arrest for a DUI and drag racing in a rented yellow Lamborghini, during his time in Miami tops it all. Bieber even recently admitted to police that he had taken prescription drugs and smoked marijuana. The boy who got arrested last week in Miami Beach, after a nearly a year of other negative newsmaking behavior, is far from the talented teenager I first started to like more than four years ago.

The fame and excessive adoration from his fans has certainly gone to his head, thinking he is untouchable. Hopefully, the incident in Miami serves as a news flash for him and everyone. No one is above the law, even celebrities.

This past year has been a downward spiral into a dark place for Bieber. Until now, I had some hope that he would realize his faults and get back on track with the help from his family and manager Scooter Braun.

But it seems his former guiding influences have been unsuccessful in reprimanding his bad behavior. At almost 20 years old, his management and mother, Pattie Mallette, believe he should be “mature” enough to make his own decisions. His group of friends aren’t keeping him grounded either, many of them have  been questioned and arrested by the police alongside the young pop star.

Back during 2010, the good old Justin days, he was a sweetheart who interacted with fans, made good and enjoyable music, flipped his hair like he was paid to do it (he probably was), was not caught up in girl drama, and would not be caught dead in the news for acting out of line.

When he tweeted “My beloved beliebers I’m officially retiring” on Dec. 24, I had hoped he would use it to spend time with his family and get his act together. Instead of using it to find himself, it seems he has become lost even more. Now he’s spending thousands of dollars at strip clubs, spraying graffiti all over LA, drinking underage, doing drugs, and having the police search his house all while he’s supposed to be on a “break”.

Beliebers used his arrest to their advantage, as they stood singing outside his jailhouse, after his release. So mesmerized by his stardom, they over-looked the illegal actions that brought their idol to the Miami jailhouse.

The infamous “Beliebers” are delusional and are one of the main causes for his big ego. Even with his multiple altercations with the police, they continue to tweet outrageous things such as, “the fact that Justin Bieber is a ‘bad boy’ just makes him more attractive #YouGoBieber” and  “if he gets deported I’m moving to Canada with him”.

Constant idolization and the inability to see Justin’s countless flaws has driven me and other former “Beliebers” away. People joke that Bieber’s fan base is a bunch of 8-year-old girls, and although the joke misrepresents the age of many fans, it’s not too far off in terms of their maturity level. They believe Justin is perfect and can never do wrong, and will defend him no matter what crazy or illegal action he takes.

A large portion of his fans will defend him and his actions on their death bed. Beliebers put Justin on a pedestal, one that he can never be knocked off, for they will always conclude that he is allowed to act outrageously because he needs a stress relief from the limelight, and he’s “still a teenage boy”.  This is not a legitimate excuse for his behavior.

Most of the time Beliebers blame the press for making his actions front page stories, which I can understand. The media, especially TMZ and Perez Hilton, follow and analyze his every move and create rumors left and right. Sadly, more recently Justin’s actions have been accurately portrayed. The media has had no reason to exaggerate, because Justin has gone off the deep end. So, can he make a comeback?

Even after being arrested on Thursday January 23, Justin continued his vacation and is currently relaxing in Panama with friends. Obviously his run-in with the law did not interfere with his plans of vacationing out of the country, just two days after paying bail.

Watching Justin’s current actions and behaviors has me singing along to “One Time” , wishing that baby Biebs could take us back to 2010, when everything was good.