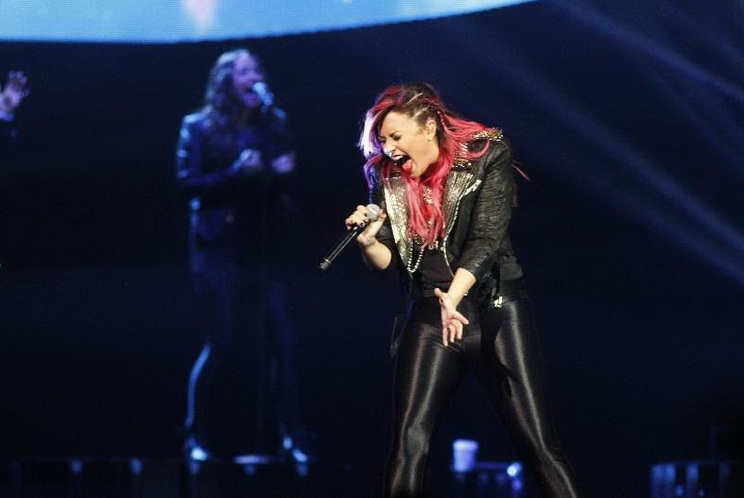 If one thing is for certain, it’s that Demi Lovato’s Neon Light’s concert was just that. Burning up with talent and female empowerment. Wednesday, February 26, Lovato came to the Tampa Bay Times’ Forum and headlined a powerful concert that kept everyone on their feet.

The concert had high energy from the beginning. Collin Keys, a young magician from America’s Got Talent 2013, hosted and performed tricks in between acts to allow set changes to occur without the audience dying from boredom. His tricks entertained the awaiting fans, and even awarded one lucky fan a backstage pass.

As the lights dimmed down for the first time during the evening, screams filled our ears at the anticipated performance from the first opening act.

Fifth Harmony, an all-girl band (who was formed and won third place on X-Factor USA 2012), started the concert off with a bang. The girl group consists of five members, Ally Brooke Hernandez, Normani Hamilton, Dinah Jane Hansen, Camila Cabello, and Lauren Jauregui. Dancing around on stage to their hits ‘Me & My Girls’ and ‘Miss Moving On’, Fifth Harmony got the crowd pumped and ready for the night, they even covered a Destiny’s Child of ‘Independent Women’.

Little Mix made X Factor UK history by being the first group to ever win the competition in 2012. The four girls recently released their sophomore album Salute, which they sang three songs from (‘Salute’, ‘Move’, and ‘Little Me’), as well as their single for the charity Sport Relief , ‘Word Up’. The British all-girl group  of Perrie Edwards, Jade Thirlwall, Jesy Nelson, and Leigh-Anne Pinnock, to my tear-filled eyed delight sang ‘Don’t Let Go’, which they originally performed while competing on X Factor. They also performed ‘Wings’ and ‘DNA’ from their very first album realsed in 2012.

As the opening acts exited the stage, a short intermission gave the crew time to change sets for Lovato’s performance. It didn’t take long for the lights to dim and the screams to rise in anticipation.

Senior Gabrielle Madden, a fan of Lovato, described the concert as, “Amazing, I’ve never been to a better concert. She sang fantastically and her setlist was perfect.”

Lovato opened with her single from the summer ‘Heart Attack’. The energy radiated from the stage and crowd from the very first note. Along with her backup singers and band, she rocked out on the stage the whole night, never allowing a dull moment to develop. The audience sang every word no matter if the song came out this year or 2008 when she began her music career.

“I honestly am speechless as to how her music can make an impression on me,”expressed senior Jess Riddle.

During one song Lovato jumped down from the stage and into the crowd. The screams escalated as fans got up close with their idol, and one fan handed her a hat with the Venezuelan colors decorating it. Lovato kept the hat on for a few songs, and before her ballad ‘Warrior’,  she gave a speech addressing the turmoil and pain citizens of Venezuela are currently enduring.

Introducing the empowering song, she also spoke out against bullying, eating disorders, self harm and other problems plaguing society. The serious moment of the concert, including a video recap of her rehabilitation in 2010, confirms the idea that Demi is a serious artist, as well as a serious role model for young girls to look up to.

Madden explains, “Demi is such an inspiration and an amazing role model who has gotten me through rough times.”

Continuing on her inspirational spree, she performed ‘Let It Go’ from the Oscar-winning Disney movie Frozen. The combination of the fun upbeat songs along with the emotion-filled ballads formed one of the best concerts I’ve even attended.

The three acts empower girls everywhere to be who they are and not be ashamed of themselves. Their music and actions display that, exemplifying the reason why they are such amazing role models for young girls to have.