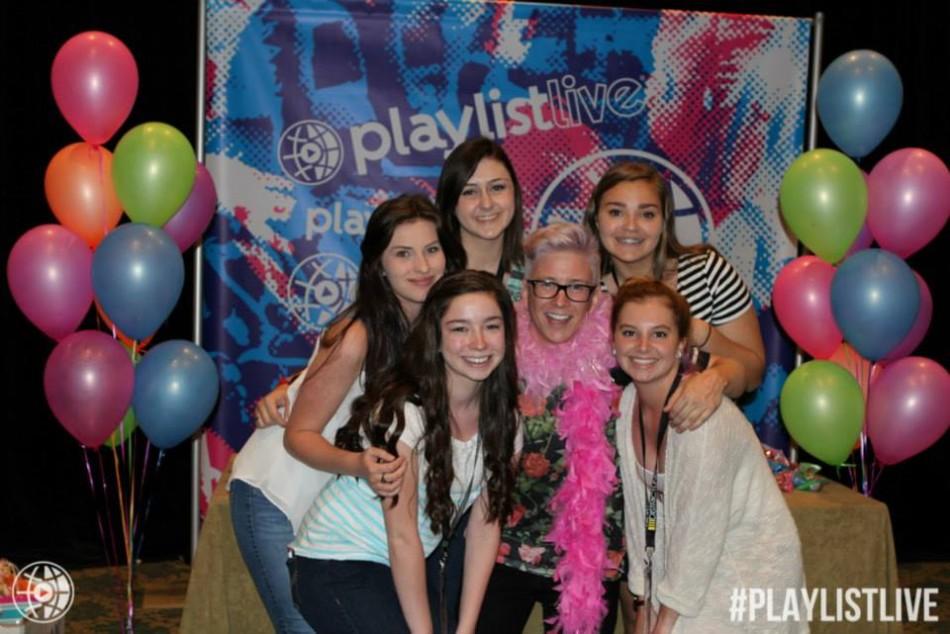 "I've watched Tyler's videos for years, so meeting him in person was such an amazing experience," senior Emily Dever explained.

Playlist Live first began in 2011 and was created by District Lines, an online company that many YouTube creators use to sell merchandise.

Starting on March 21 with Business Day, the convention had panels ranging on topics from “Starting a Small Channel” to “Being a Woman on YouTube”. The panels had both experienced YouTubers and company representatives, sharing multiple perspectives of the YouTube world with those who bought Business Day passes.

The first official day of Playlist started bright and early. Fans lined up as early as three in the morning to have the chance to be the first inside the convention center. Once the doors opened at ten, it was non-stop energy and excitement.

That Saturday and Sunday consisted of interviews of YouTubers, musical performances spread out over three stages, continuation of business panels, meet ups where fans could meet and get a picture with their favorite creators, dance parties, and crowds of people.

As this year was Playlist’s fourth year, many changes occurred some good and others we could have done without. The organization of the events increased from the pervious years, but the extra thousands of fangirls made it hard at times to enjoy them. Playlist doubled the attendance number without accommodating for the large crowds and lines that the 4,000 plus addition would cause.

For the first time ever Playlist Live has added another date and location expanding the experience to the Tri-State Area in New Jersey this fall.

The lines for meet ups with the biggest YouTube sensations such as Dan and Phil, the “Holy Trinity” consisting of Hannah Hart, Grace Helbig, and Mamrie Hart, O2L, Sam Pepper and Mazzi Maz, Jenna Marbles, Tyler Oakley, and the Brits, began to form hours before it was scheduled to start. These meet up lines cut off hundreds of awaiting fans, including those who paid to have Line Passes.

Security and staff increased dramatically this year, keeping the YouTube creators safe from being mobbed by crazy fangirls. As well as helping attendees with any confusion or problems they might have.

They added food trucks outside of the convention center this year, giving the attendees and creators more options for food instead of only the pool-side snack shop. For being the only on-site food source lines to order were long and food ran out easily, but once an order was made the food took a short time to be made and placed in your awaiting hands.

The insane weekend went by in a flash. Any worries or disappointments attendees had were easily erased when faced with one of their favorite creators. The overall experience was pleasant, but some attendees question if they will return for the 2015 convention as Playlist continues to dramatically increase in attendance.