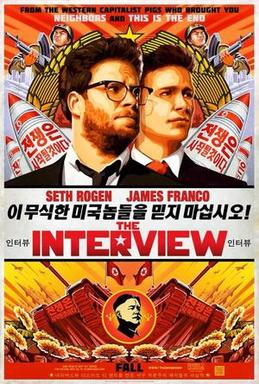 In this action-comedy film, Dave Skylark, who is played by James Franco, and his producer Aaron Rapoport, who is played by Seth Rogen, run a late night television show called “Skylark Tonight”.  They find out that the North Korean dictator, Kim Jong-un, is a huge fan of their show and wants to land an interview with them. Since their television show is known to feature pointless celebrity gossip, Dave and Aaron announce on their show that they will be interviewing the one and only Kim Jong-un.  Despite what others say, they believe they can produce a serious interview.

I, personally, loved the movie.  It had the perfect amount of humor.  Although, I do have to say they did carry it on a little too long.  If you are one who loves The Dictator or the Ace Ventura movies then this is the perfect film for you!

Netflix will be streaming The Interview as of Saturday, January 24th.

Here is what AHN girls have to say about the movie:

1. How did the movie compare to your expectations?

Sophomore Emily Villanueva says “I had already heard that the movie was great from prior ratings, so my expectations were high and I loved it!”

2. What was your favorite part?

Sophomore Hannah Menendez explained, “My favorite part of the movie was when Kim Jong-un and Dave Skylark were in the tank singing to Katy Perry.”

3. What was the most shocking part of the film?

(SPOILER WARNING) Senior Rachel Anderson explained “The most shocking part of the movie to me was when Kim Jong-un was killed. I was shocked that the producers would go that far and I was afraid that North Korea was going to be offended that we killed their leader.”

4. Do you think that the hacking threat gave the movie more attention?

Sophomore Haley Morrell said that “The hacking threat definitely gave the movie more attention because when they announced that it was not going to be in theatres, everyone went crazy.”

5. Do you think that the threat of a hack was a publicity stunt?

Mrs. Kimbler had a strong opinion on the movie and said “Yes, it was definitely a publicity stunt.  It was just like Miley Cyrus’ Wrecking Ball performance that got her album to number one.”