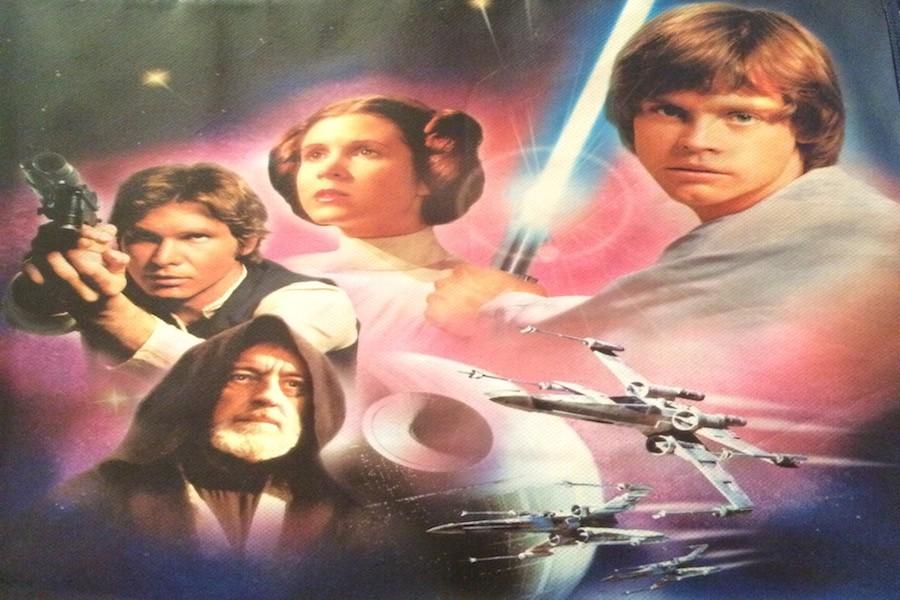 Merchandise portraying members of the original Star Wars cast, like this gift bag, are resurfacing in anticipation of the new trilogy.

It has been 10 years since the release of Episode III: Revenge of the Sith, which documented Darth Sidious’ plan to takeover the Galaxy and the consummation of Anakin Skywalker’s transformation into Darth Vader. Upon the completion of the third and final film of the prequel, it appeared as though there was nothing left to say of the saga. Since 2005, avid Star Wars fans have been desperately searching for something, anything, to fill the void left gaping by the lack of new movies. In 2012, Disney purchased Lucasfilm and announced that a new trilogy of Star Wars movies would hit the big screen, beginning with the December 18th, 2015 release of Star Wars: The Force Awakens.

Evidently, the new films are incapable of picking up where the old left off, since the original story has reached its conclusion. However, the new film will feature a considerable number of previous cast members, including Mark Hamill as Luke Skywalker, Harrison Ford as Han Solo and Carrie Fisher as Princess Leia, that will contribute to its authenticity. Junior Megan Przedpelski expresses excitement about the return of fan favorites Hamill and Ford, but admits, “I’m honestly really going to miss Darth Vader.”

The Force Awakens in 10 days

Conversely, the implementation of new cast members will help provide a unique new storyline that should captivate old and new fans alike. While his ultimate purpose in the film is still up for speculation, John Boyega first appears as a Stormtrooper who very well may also be Lando Calrissian’s son. This revelation in his lineage is an indication that he might oppose Luke Skywalker and the other Rebels, but skeptics are almost certain that the primary villain will be Kylo Ren, played by Adam Driver. Senior Patricia Sandoval points out that Driver, “has a lot to live up to. In the past, Star Wars has had some fantastic villains such as Emperor Palpatine, Jabba the Hut, Boba Fett, and of course Darth Vader. So following in the footsteps of these classic villains is quite the task. After all, heroes are only good as the bad guys they have to face.”  Ren’s surname is derived from his involvement with the Knights of Ren, an organization that shares qualities characteristic of the Sith. Perhaps these similarities will enhance the strength of Kylo Ren’s character, thus meeting the standards of devoted fans such as Sandoval.

For the first time in the history of the series, a female character displays promising potential. Daisy Ridley will take on the role of a character referred to as Rey, sans surname. According to the Star Wars website, Ridley’s persona is “a resilient survivor, a scavenger toughened by a lifetime of dealing with the cutthroats of the harsh desert world of Jakku.” Aside from this tidbit, Rey’s purpose remains unclear. However, Ridley did reveal that Rey’s journey begins upon “meeting another character.” Senior Maddie Matesich gushes, “I really like how they made the hero a heroine because I’ve always idolized the strength and fearlessness of Star Wars characters. So by incorporating Rey, the producers are providing young girls with a relatable role model which society definitely needs.” Certainly, Rey’s independent demeanor will inspire fans of all genders similarly to Star Wars’ past male protagonists.

The legacy has set the new trilogy up for great success or utter failure, depending on the reactions of Star Wars’ most dedicated followers. Director J.J. Abrams, his cast, and his crew have kept the contents of the plot relatively secret aside from select interviews and a couple trailers. With this, eager fans have the best chance of gathering accurate information by patiently waiting until December 18th, when the film is set to release.