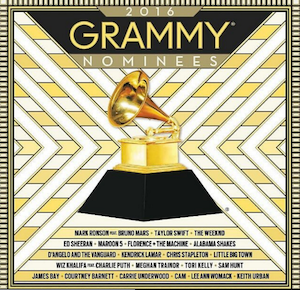 Every year, people around the world stop and take a break from their hectic lives in order to tune in and watch “music’s biggest night” – The annual Grammy Awards. Since 1959, these prestigious music awards have connected musicians and their fans to witness a potential award winning moment in their music career. This event is so prestigious that simply being invited to this “black-tie” event is considered an honor.

On Monday December 7, 2015 Grammy.com released this year’s selections and  it offers a promising turnout with Taylor Swift and the Weeknd each gathering seven and underdog, Kendrick Lamar garnering 11 nominations. This year’s major nominations are as follows:

This year’s major nominations are as follows( credit: People Magazine.com):

Record of the Year:

The Record of the Year award specifically illuminates a song’s performance and production.This year’s nominations include:

D’Angelo and Vanguard for “Really Love”

Ed Sheeran for “Thinking Out Loud”,

-The Weekend for “Can’t Feel my Face”.

Junior student, Rachel Tata predicts, “Last year (2015) was a really big year for Taylor Swift and Ed Sheeran and their music really exploded so I’m gonna predict that they will definitely both leave with a win in hand.”

Freshman, Robin-Sailor Zander believes the Weeknd will be this year’s recipient because,“His music has become so popular, so recently. Or Taylor Swift, because her career has exploded within these past years with so many hit songs.”

Song of the Year:

The Song of the Year award highlights achievements in the writing of a song during the the past year. The nominations are :

Ed Sheeran for “ Thinking Out Loud”

Sophomore and hip-hop enthusiast,  Alex Smith says, “My pick for song of the year is Lamar’s song “Alright”. He’s such an innovative artist, but hasn’t won very much in the past, compared to the other artists in his category.”

Yet, Sophomore Cydney Figueroa thinks, “The pick could be Blank Space, because the Academy Awards love Taylor Swift.”

Best New Artist: This award goes to the breakout artist of the year and his/her achievements. The picks are:

Freshman, Dayzha Cartwright believes,”I think Meghan Trainor’s nomination is well deserved because from my understanding  she has worked  very hard for what has come her way.”

Crying all day.?????? what an honor it is to be next to such incredible artists like @torikelly @jamesbaymusic @samhuntmusic and #CourtneyBarnett ..thank you to the @thegrammys for this amazing nomination!!????

Album of the Year:

The last award given of the night. It is often considered the biggest award in terms of its prestige. This award credits an artist and their producer for his/her achievements in performance and production of an album.

And the nominations are…

Alabama Shakes for “ Sound and Color”

Kendrick Lamar for “ to Pimp a Butterfly”

The Weeknd, for “Beauty Behind the Madness”

Junior, Teresa Toranzo states,“I think that Kendrick Lamar rightfully deserves the award for his album, To Pimp a Butterfly.”

Her sister, Isabel Toranzo (sophomore) mostly agrees yet counters with, “Taylor Swift will probably receive the award due to her influence in the music industry right now.”