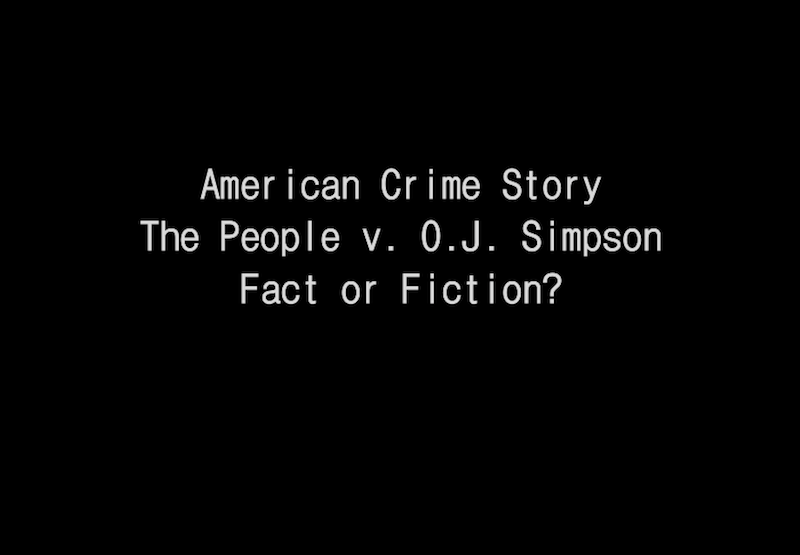 American Crime Story is from the same people who created the popular show, American Horror Story.

On February 2 the trial that was popularly referred to as the “trial of the century” was brought back into the spotlight. The producers of American Horror Story created American Crime Story: The People v. O.J. Simpson. The actual trial took place in 1994 before all current Academy girls were born, however many teachers and parents did live through this trial and remember the heinous crime that was overlooked.

Academy junior Sophia Bahr’s father, Kevin Bahr, shares, “I remember the trial being on all throughout the day and I would watch it during the work day.”

Academy Math teacher Megan Dubee was in seventh grade at the time of the trial and recalls, “There was something about a glove and a court case ‘If the glove doesn’t quit you must aquit’ we watched the verdict in my seventh grade science class.”

Academy mom, Julie Padron, remembers, “So many people were willing to overlook the crime he allegedly committed because of the so called “race card”. It was very black and white.”

Were the bodies of Nicole and Ron found by a dog? FACT AND FICTION

The first episode of the show, a man is walking a dog and the dog starts barking, gesturing to Nicole’s house. The man then looks closer and sees two dead bodies. This is fact, with a little bit of fiction. It was Nicole’s dog that alerted neighbors of her death. Her dog was outside barking and a passer-by saw the blood on the dog’s paws and then called the police. Although the show depicts this scene differently than it actually occurred, both convey the same idea.

The kids were upstairs asleep when Nicole and Ron were murdered.  FACT

On the television show, OJ and Nicole’s kids are shown sound asleep at the same time that their mother and Ron Goldman are lying on the floor dead after being brutally murdered. Although, it is hard to believe that the kids would not wake up from the violent crime, it is a fact that they were asleep throughout their mother’s murder.

Was Marcia Clark really the center of the media? FACT

On the show Marcia Clark receives a lot of public criticism about her appearance and parenting skills. The public seemed to think that Clark was the one on trial. All of the attention Clark received surrounding her appearance and personal life was not fabricated, and is indeed a fact. Just as seen in the show, Clark did cave to the negative comments and changes her hair style.

Did Marcia keep Jill Shively off the stand because she sold her story? FACT

When the prosecution was assembling their witness list Jill Shively, who witnessed Simpson recklessly driving the bronco, was an integral part of the case. However, Shively seemed to be more interested in her personal gain than the pursuit of justice. She sold her story to the press and as a result of this was taken off of the witness list. This really happened, even though Shively was a strong witness Clark removed her from the list as soon as she received word that Shively sold her story.

Did Nicole’s best friend Faye Resnick publish a book about her? FACT

On the television show Nicole’s long time friend Faye Resnick does a series of interviews about Brown’s life. Resnick divulges everything about Brown’s relationship including his jealousy and his history of abusing her. It seems odd that someone so close to Brown would share her most intimate secrets with the world. However, it is fact that Resnick did several interviews and even published a book called “Nicole Brown Simpson: The Private Diary of a Life Interrupted.” Resnick’s book gave the people secondhand insight into her and OJ’s dark relationship.

Was there really a dispute between Johnny Cochran and Chris Darden about the use of the n-word in court? FICTION

On the show, Christopher Darden asks the court to ban the use of the n-word because of the emotional response that it triggers from many African Americans. After Darden’s speech, Johnny Cochoran follows with a speech ripping Darden’s argument to pieces. Although this exchange seemed to be realistic, it is fiction. This exchange depicted the two mens’ feelings that were never shared in the actual trial.

Fun Fact: Dubee shares, “One of my teachers stopped teaching to become an assistant for Johnny Cochran after the trial.”

Before jurors toured OJ Simpson’s house, the defense or “dream team” is shown redecorating his entire house. They replaced pictures of him partying with African American Artifacts, they ensured that all of Simpson’s significant athletic achievements were on display. They redecorated Simpson’s house to make him appear to be very attached to his ethnicity even though Simpson was not a contributing member of the African American community.

The creators of ACS: The People v. O.J. Simpson have kept the show factually accurate and entertaining for viewers. This show gives people of another generation an opportunity to learn about one of the most infamous trials in the last few decades.