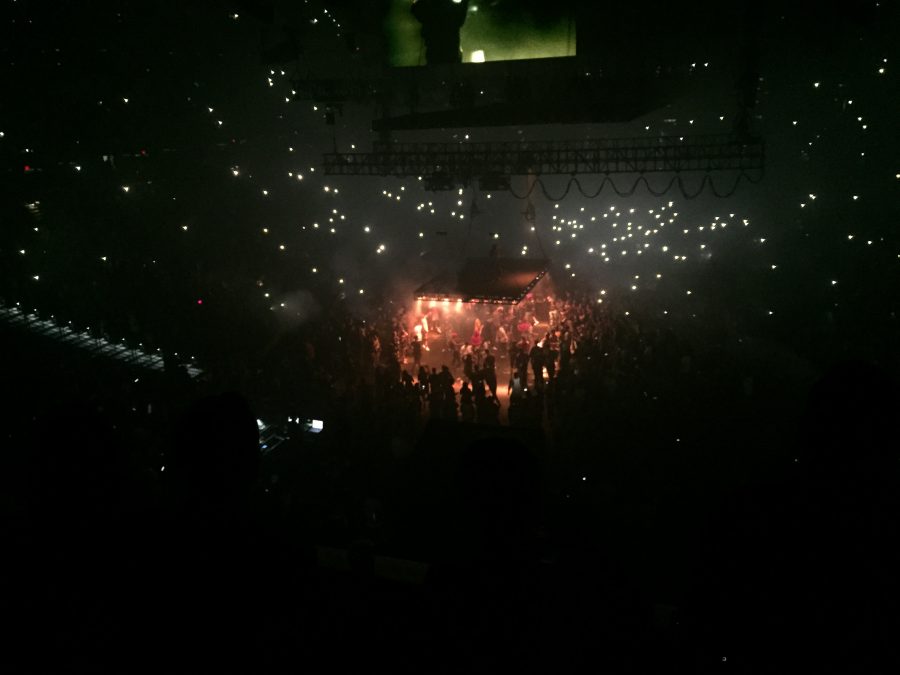 Fans almost forgot that West showed up over two hours late once he started his breathtaking performance on his floating stage.

On September 15, 2016, several Academy girls witnessed the long-awaited Kanye West Concert. His show in Tampa was his eleventh stop on his tour that started on August 25 in Indianapolis. Much to the displeasure of the audience, West did not come on stage until about 10:20pm even though he was slated to come on at 8:00pm. However, his fans quickly forgave him due to his energetic and passionate numbers.

Senior Olivia Valdes comments, “I had been waiting for the concert for a long time. I like his music because it is all about himself, and I think it is funny how self-centered he is.”

At around 10pm, the audience became restless as they anxiously awaited for West to begin his show. When he finally came onto the stage and started singing “Father Stretch My Hands”, the crowd went crazy. He followed that by performing his new song “Famous” before eventually going off on a rant about fellow rapper Kid Cudi. West took a few harsh jabs at Cudi for his tweets earlier that day complaining about how rappers like Drake and West have too many people writing their songs for them.

Everyone thinks they're soooo great. Talkin top 5 and be having 30 people write songs for them

Maddy Ruppel  (11) says, “I thought it was annoying when he showed up so late, but I expected nothing less from Kanye. His show was so good though, so he definitely made up for it.”

West sang a good combination of new and old songs. He sang a lot of songs from his newest album, The Life of Pablo including “Waves” and “Pt.2”. Additionally, he also performed many fan-favorite songs from past albums including “All of the Lights” and “Mercy”. He closed the show with his extremely popular song “Ultralight”.

“I loved how the whole crowd was having so much fun, regardless if they knew the song or not,” shares Megan Scanlan (10).

West’s show was made even more unique because of his floating stage. Instead of performing on a regular stage, West performs on a stage that moves back and forth as it hovers above the floor. The people with floor seats dance underneath the stage as it moves over them, and everytime West stomps or jumps on the floating stage, the whole stadium shakes.

Junior Amber Pedregal comments, “The floating stage was definitely different and I feel like Kanye always wants to be different, so seeing this at his concert was interesting and super cool.”

We gon let you finish, but @kanyewest has the craziest floating stage we've ever seen! ? pic.twitter.com/MbljRruYfV

West’s tour will continue across the United States until November 1 when the tour concludes in Los Angeles, California.