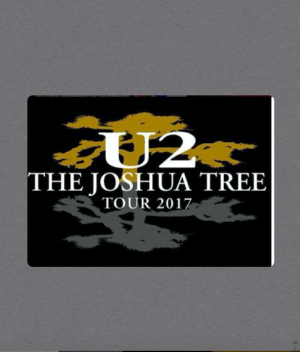 Rolling Stone Magazine named them "the band of the 80's".

In the beginning of the new year, Irish band U2 announced a new European/North American tour in honor of the 30th anniversary of their album, The Joshua Tree. Classic rock fans will be glad to know they are scheduled to hit Miami on June 11 and then Tampa at Raymond James Stadium on June 14.

Students may know the band for their charitable efforts and even their free Songs of Innocence album that dropped on Apple iPhone users’ devices in 2014 to half a billion Apple people.

Senior Ashley Achin says, “Apple should have given people a heads up before downloading a whole album to every single iPhone.”

With humble beginnings, the band, first known as “Feedback”, began when drummer, Larry Mullen made a note on his high school bulletin board seeking peers for a new band.  Three others showed up with Adam Clayton on bass, Paul Hewson (Bono) on vocals and Dave Evans (the Edge) on guitar. After months of rehearsing the band made its big break by winning a talent show in Ireland in 1978 with a 500 euro prize and studio time to record their first demo. In 1980, newly named U2 produced their first album, Boy.

Seven years later with the release of The Joshua Tree, the band reached greatness with number one songs such as “With or Without You”,“Where the Streets Have No Name”, and sold out stadiums throughout the world.

Lead singer Bono says, “Recently I listened back to The Joshua Tree for the first time in nearly 30 years. It’s quite an opera. A lot of emotions which feel strangely current, love, loss, broken dreams, seeking oblivion, polarization… all the greats… I’ve sung some of these songs a lot… but never all of them. I’m up for it, if our audience is as excited as we are… it’s gonna be a great night.”

Fans anticipate their newest concert, especially since it’s a Joshua Tree revival tour. Parents may remember when U2 hit Raymond James (years back) with a sold out concert in 1992.

Spanish teacher Mickey Stagg says, “I absolutely love U2! Their songs remind me of the college years and when I first started dating my husband. We saw U2 in 1992 at Tampa Stadium (now called Raymond James Stadium).”Stagg then says,”My favorite songs are ‘(Pride) In The Name of love’, ‘Beautiful Day’ and ‘Still Haven’t Found What I’m Looking For’”.

Academy students are excited for their 30th-anniversary tour as well.

Senior Teresa  says, “‘Vertigo” was my jam growing up.”

Senior Leila Zupsic says, “I like U2’s sound, it’s different and my mom and I love them. I want to go to their concert, but prices are expensive. My favorite song is “With or Without You”.

One Republic and Mumford and Sons are expected to open for the band. Tickets prices vary.