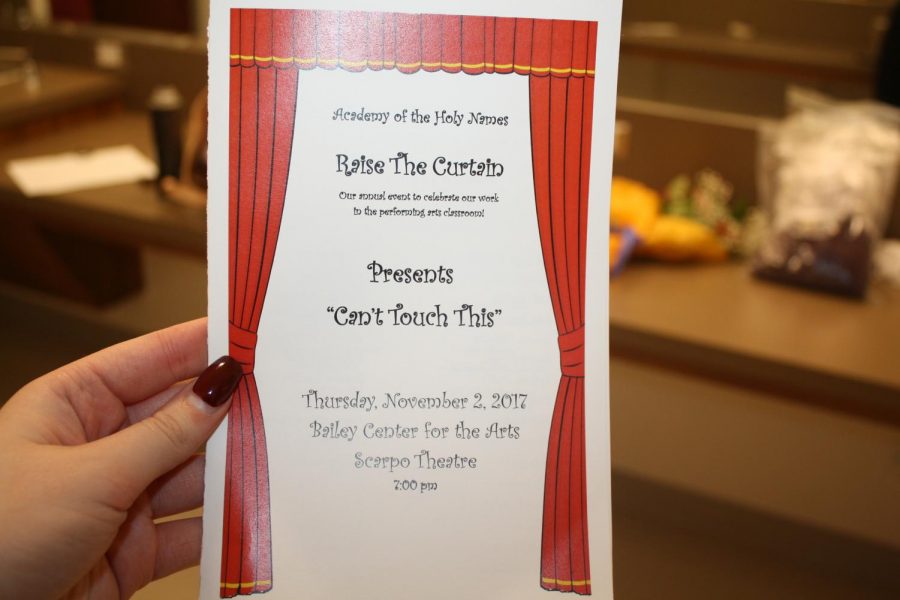 Raise the Curtain was brought to the Academy by Kimbler and has been an AHN tradition ever since. Photo Credit: Gracie Wipfli/ Achona Online.

On Nov. 2, Academy students performed in the annual “Raise the Curtain” event. This evening of performance celebrates the arts and showcases some of Academy’s best talent. Students were able to present what they have been working on in various performing arts classes. Academy’s Tech Theatre class, Advanced Acting, Intro to Acting, Dance Appreciation, Dance Choreography Honors, and Quarter Notes all performed pieces in the show.

The showcase took place on the Lynch Family Stage in the new Bailey Center for the Arts. Hosted by the head of the Performing Arts Department, Vivian Kimbler, the show lasted two hours. Dancing, singing, and acting were the highlights of the night.

Performances varied greatly in mood. Monologues from Jared Porter’s advanced acting class had a more somber and haunting tone, whereas, the Quarter Notes were more upbeat and playful. These performances evoked much reaction from the audience. Whether they were laughing, crying, or observing in awe, all in attendance were wowed by the AHN students.

“My last time performing on this stage was a blast, I had so much fun. I’m really going to miss all the energy that my sisters give me while performing,” Lyric Vickers (’18) said.

“Our dance was supposed to represent women empowerment, which goes along with what Academy is all about.We felt like this topic was really important to our sisters. So, we shared it the best way we know how: dancing,” Crall said.

Many friends and family came out to support, and the show received widely positive reviews.

“It was such a great show. It was really entertaining to be in the audience and take it all in. I’m really impressed with all the talent Academy has to offer,” Mary Kelly Cardillo (’20) said.

Cristina Solar-Suarez (‘18) and Allie Golson (’19) were honored during the finale for being accepted to the High School Honors Performance Series at Carnegie Hall in New York City.