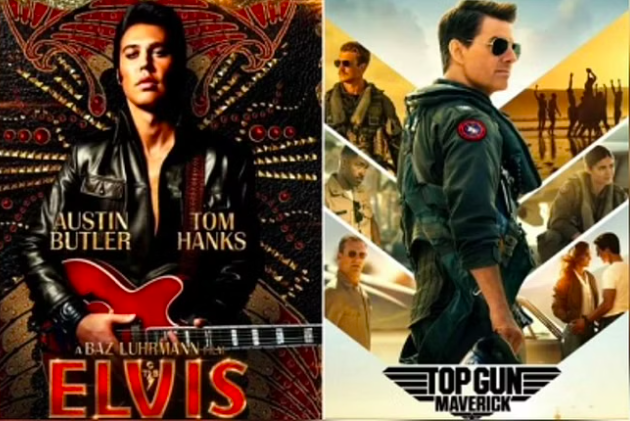 Both movies' posters that were seen in the theaters by the public, as they competed for ticket sales.

Due to the COVID-19 pandemic, movie theaters have been pretty abandoned in the past two years, But this June brought life back to the theaters with big blockbusters Baz Luhrmann’s “Elvis” and Joseph Kasinski’s sequel “Top Gun: Maverick.” Although, a question still goes unanswered: Which movie was the best film of the summer of 2022?

As Austin Butler starred in the new Elvis movie as the King himself, Elvis Presley, people believe that Butler’s face is one of the main reasons the younger generation has been so obsessed with the film and suddenly love Elvis’ music. His looks have drawn in an entirely new audience, but the movie was originally meant as a biopic for an older population to enjoy.

“Before June 23rd, I have never listened to Elvis’ music unless forced by my Nana. Now, I have seen the movie 8 times and know every word to the entire soundtrack. Elvis is my new king,” said Ava Politz (‘23).

While the Elvis film took over with its unique directing by Luhrmann, it was longer film, with the length of the film being about three hours. This speaks to the quality of the movie because people were willing to see the same lengthy movie numerous times.

“I think the reason I loved this film so much was because of how accurate it was done. I have never seen anything like it, the fashion and every little detail was down to the wire perfect,” said Anna Myers (‘25).

On the other hand, “Top Gun: Maverick,” the very well-reviewed sequel to the iconic 1986 film “Top Gun” starring Tom Cruise, also gained a lot of traction this summer. This film was released in May 2022 and was at the top of the charts for months. The incorporation of young and well-known actors such as Miles Teller collaborating with Tom Cruise was a clear representation of bringing two generations together in one movie, as many enjoyed it because of the age gap being closed.

“I did not know if I would enjoy seeing Top Gun: Maverick just because I am not into many action movies. I went and saw it with my dad and was joined by at least 30 others his age in the theater, I was not excited at all, I hadn’t even seen the first one. But when I left the theater, I was already looking at showtimes for the next day. It was one of the best movies I have ever seen,” said Lauren Brown (‘23).

Top Gun: Maverick was seen by the public as a blast from the past, but with better quality and effects. Young adults were exposed to the classic film because of this movie and still loved it if they watched it in the wrong order.

“After I saw Top Gun: Maverick, I went home and watched the first movie. But, the sequel was just so good that I did not even think I needed to watch the first before, the movie was so well made, and I was not confused at all during the course of it,” says Caroline Arnold (‘24).

Many have been comparing not just “Elvis” and “Top Gun: Maverick” against each other based on the plot, but most have taken their opinion based on Miles Teller and Austin Butler. The main point that has been made by Top Gun fanatics has been that Teller could be a great Elvis, but Austin Butler could never have been Rooster. On the “Elvis” side, the fans support Butler’s dedication to truly embodying Presley based on the mannerisms, the voice, and his overall smoldering look. He has been extremely recognized by many for his perfect impersonation throughout the movie.

“Now don’t get me wrong I love Miles Teller, always have always will, but Austin Butler literally became Elvis Presley. I have fully left the movie theater thinking that Austin Butler was Elvis Presley, and it took me a while to realize that it was just him playing a part,” said Maggie Smith (‘23).

So it still comes down to one question, which movie was the best of the summer? Did “Elvis” or “Top Gun: Maverick” bring back the movie theaters? One side sees that Austin Butler’s performance is the sole reason anyone has even thought about going to the theaters, and the other side sees that Tom Cruise and Miles Teller brought the generational gap to a close in their sequel of a classic. We may never know which one was truly the movie of summer 2022, but both made a massive impact on the younger generation’s entertainment and pop culture knowledge.