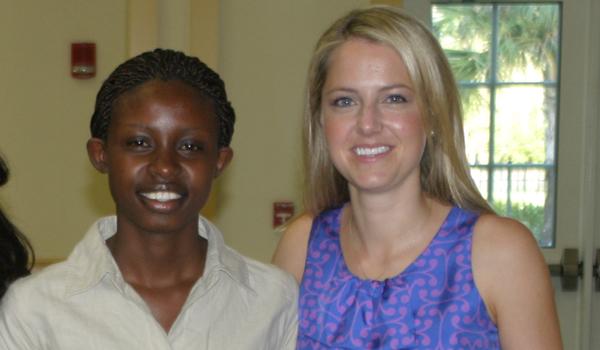 As Academy students entered the Brady Center for a special presentation on Thursday, September 30, no one imagined the impact two young African women would create. Sponsored by the Akilah Institute for Women, two Rwandan women, Gisele and Anita, shared their inspirational survivor stories resulting from the 1994 Rwanda genocide and the powerful inspiration they have acquired through education.

Gisele and Anita are students at the Akilah Institute for Women, where they are currently expanding their knowledge through education as well as becoming leaders in their fragile communities. Not focusing on their negative childhood, but rather reaching for a positive future, these women are unstoppable when it comes to following their goals and convictions.

Before Gisele and Anita had great appetites for leadership and education, the Rwanda genocide has affected them and countless other Rwandan families. The turmoil began in the late 1950s when the Hutu overran the Tutsi monarchy as a result from political unrest and search for power.

Although the Tutsi and Hutu are from the same origin, their ethnic differences are determined by how many cows they own; those who own 10 or more cows are categorized as Tutsi, while those who own less than 10 are known as Hutu.  After the Hutu takeover, the Hutu’s demanded to eliminate their competition, which consequently led to the mass killings of nearly 1,000,000 Tutsis and moderate Hutus in only 100 days. As a result of the massacre, 60% of Rwanda’s current population is under the age of twenty five, 70% of the population is largely female, and most of its inhabitants are orphans.

The devastating impact of this genocide is still felt today among many communities. According to MSN.com, the United Nations has recently recognized a massive Hutu burial ground in Congo, dating back to 1997, demonstrating a second Rwandan genocide. Unlike the previous genocide, the 1996- 1997 genocide was lead by the Tutsi against the Hutu in retaliation for their previous persecutions.

Sixteen years after the massacre, Rwanda has grown immensely and positively. Rwanda is no longer governed by either the Hutus or Tutsis, but rather by an established political government who practice democracy and strive for peace. With 57% of the population living on less than $1 per day, the government’s main goals include diminishing the poverty line, ending corruption practices, and developing the country for its future.

Many of those Rwandan citizens who are enacting new forms of legislations and changing the negative ways of Rwandan corruption are women: in 2008 and 2009, Rwanda held the first place title for having the most women representation (56%) in Parliament.

As a result of the genocide, many Rwandan women have taken up male dominating leadership positions, but with only 10% of teenagers finishing high school, many women are not receiving an adequate education to further them in the future. That is where the Akilah Institute for Women steps in. With an innate passion for helping others, Co-Founder Elizabeth Dearborn Davis reached an idea inconceivable in 2008:   to establish her own school directed towards educating women impacted by the Rwanda genocide.

“I wanted to establish a place where young women, who have lived through an unimaginable tragedy… can come into a place that is a nurturing environment…where they can heal from what had happened during the genocide, and to feel comfortable with women from both tribal backgrounds.”

Fast-forwarding to February 2, 2010, Davis’s dreams became a reality the moment 50 intelligent, positive, powerful, independent, and self-confident women filled the Akilah Institute classrooms for their first day of school. Meaning “wisdom” in Swahili, the Akilah selected these 50 unique women because of their brilliant self-confidence, astounding leadership, and their desire for knowledge. Even though the Akilah only has 50 students today, Davis’s next goal is to expand the Akilah Institute in Kigali, Rwanda’s capital, to other locations and enroll around 800 students in the new campus.

In order to unlock their potential, all Akilah Institute students must first grasp the key of education, which will be no difficult task for them.  “Their whole lives, they’ve been survivors,” explains Davis. “Now at Akilah, the women are still fighters because they are fighting to have a better life for themselves and their families by getting an education.”

Through two academic programs, Akilah students are educated in Communications, Life Skills and with major emphasis, Leadership and Hospitality. This curriculum provides Akilah students the educational background and skills that provide them  10 times more the probability that they will attain high-paying jobs that are unavailable to women without an education. Although early in their inception as an NGO (non-governmental organization), the Akilah Institute’s main goal is to fully educate women so that they can leave a positive imprint in the world.

For two current students, Anita and Gisele, their eight months at Akilah has already made them aspire to goals in the future. Gisele’s current goal is to find a job in hospitalities, which will lead her to train adequately to fulfill her goal in opening her own hotel. “I believe I will be a very wonderful and successful woman,” proudly exclaims Gisele.

As for Anita, she hopes to guide others by helping people from her village attain their own job and discover their goals. She also aspires to become a leader by “Being a voice for those who cannot speak.”

“The lesson I want to teach young women is to believe in yourself” states Anita. “Believe in what you are doing, be strong; whatever challenges you face… keep moving on.”

Similar to Anita, if Gisele could teach young women one lesson it is “To be confident, to stand up for themselves, and to speak!”

Academy girls commented on Giselle and Anita’s  kind and noble natures and their positive self-confidence. Their hardships reminded their audience that their strwere much greater than ours, yet they have become such wonderful, strong, and independent women. As Anita reminded us “Please keep working hard, for the best is yet to come.”

What  impacted Academy students the most from the presentation by Anita and Gisele is not their tragic survivor stories, but how these two women have become such confident, self-respecting, and incredibly powerful women after facing such negativity. As one senior added, “They are an inspiration to us and remind us that we are all women who can make differences in the lives of others through our character and deeds.”