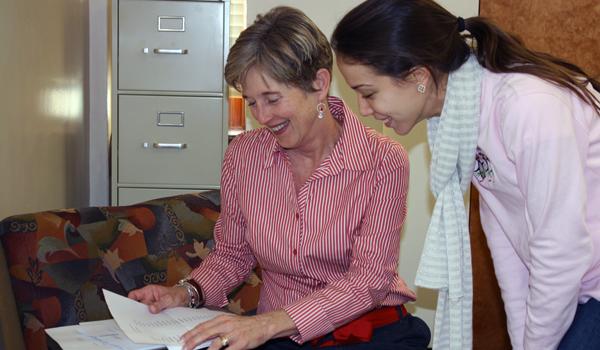 As Academy students began to stress over the impending exam week,  one club was already working on how to save the student body’s sanity.  For months, Student Council had  feverishly planned and  promoted their biggest event of the year, Christmas Formal.

Christmas Formal, hosted yearly by Student Council, knew from previous years to plan for a large turnout for this holiday social season opener, with the help of the busy and meticulous Council party planners. After weeks of intense and frequent lunch meetings of the Christmas Formal Committee, plans were in place for the “night to remember in 2010″  on December 17.

As Chairperson of the Christmas Formal Committee, Emily Caruso believed that her committee’s efforts  would pay off.  “Even though I am beyond nervous, I am excited to see how everything turns out. I really hope everyone has fun, ”  exclaimed Caruso the week before the big event.

In order to fully prep the students for Christmas Formal, Student Council performed skits, even including Harry Potter at the receiving line and the infamous “how to properly ask a Jesuit boy to Christmas Formal.” Although Academy shared some laughs through witnessing the skits, such information was readily absorbed by the freshmen who would be attending their first Academy formal.

“Student Council and the administration wanted to make the students, especially the freshmen, aware of the etiquette behind Christmas Formal,” stated Caruso.

Besides the approaching Christmas Formal, Student Council looks forward to several events for the upcoming school year. Led by President Hannah McNamara, Vice President Derecia Timmons, and many other dedicated representatives, Student Council kicked off the school year at the all- school orientation.

“The responsibilities of being president did not fully sink in until about 8 a.m. on orientation day,” stated President McNamara. “This is not a job that is done just for the credit, because in all honesty ninety percent of the work is done behind the scenes.”

In October, the club turned Academy’s basement into a frightening “Haunted Basement,” which attracted many middle school students in starting their trick-or-treating early.

Underclasswoman Catherine Young enjoyed participating because of the creative activities this event requires. “As a festive person myself, I really enjoy coming up with themes and new ideas for both these holiday extravaganzas! It is a lot of fun dressing up in costumes for Halloween and decorating the Winter Formal venue with holiday decor.”

In addition to allowing Student Council members the ability to express themselves creatively through various events, the Council has given its representatives the freedom to grow as leaders. By offering opportunities to attend leadership conferences, attain leadership positions, and learn organizational skills, the women of Student Council shine bright with self-confidence and passion.

Entering Academy in her sophomore year, Senior Emily Caruso “Wanted to join Council because I wanted to be a part of a community… that allowed me to become a leader and teach others to become leaders.”

Catherine Young attributes her growth to Student Council because she is now a passionate leader. “I love the fact that I can serve as a voice for my peers and articulate their voices to the faculty to better the school.”

After doing much work for the betterment of Academy, Student Council representatives who are now in their senior year realize how much their efforts have made an impact on Academy’s legacy. Also, the seniors have realized how each experience has shaped them into Academy leaders.

“Personally, I believe that Academy of the Holy Names is not just an academic builder, but a person builder as well. When you graduate from the Academy, you know who you are,” reminds Caruso. “I recommend all Academy girls, and future Academy girls, to think seriously about joining Student Council, or even creating a club on their own. Becoming well-rounded is the best attribute to learn!”

As president of the student body, senior Hannah McNamara has also realized what an impact Student Council has made in her life through the many Academy-related activities she has organized.  Having learned to face the challenges of coordinating many activities at once, McNamara has become a pro-active and motivated young woman, attributes she hopes other Academy students can discover.

“Don’t ever doubt yourself; you’re always stronger than you think! Experiencing AHN and Student Council for four years leads me to one conclusion: we are unstoppable young women.”

With many events already compiled in their resume for the 2010 year, Student Council is looking toward 2011 to plan future events accordingly. On January 5, Student Council will start off the new year hosting Powderpuff at Jesuit, Academy’s greatest sporting event of the year.  Unlike previous years, this year’s game will feature the Cowboys (Seniors) vs.  the Indians (Juniors).

Following Powderpuff, Student Council will host Jagball, an intense dodge ball game during Spirit Week early in February.  Already the girls are  beginning to set details for the Mother-Daughter Dinner and Father-Daughter Dance.

After hosting many events throughout the year, Student Council plans to conclude its reign by throwing a commemorative Senior Pool Party for the Class of 2011. Although their year is not over yet and the club still has many duties to fulfill, Student Council has already influenced positive action and leadership at Academy.