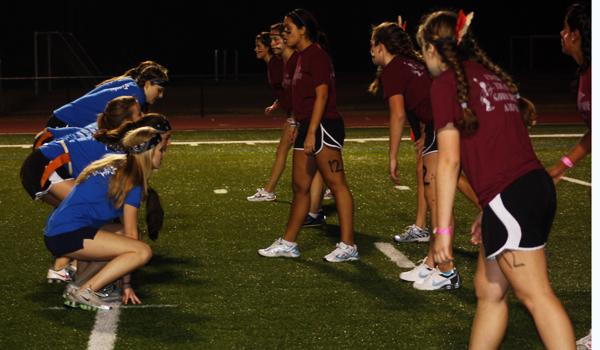 It may seem strange that Academy girls would work so hard to play somewhere other than home turf. However, when it comes to Powder Puff, Jesuit’s football field is anything but foreign soil. Up until last year, the girls had played their annual Powder Puff game under the able guidance of Jesuit student coaches.

Student council representative and senior Katie Martin shared her classmates’ reactions of resuming the tradition:  “Jesuit seemed very happy to have us back, and I know the girls loved having the opportunity to play on a legitimate football field.”

Martin and other Student Council members worked long and hard to plan this event. Planning began in October, three months prior to the game itself. They talked with Academy and Jesuit administrators alike to secure a date, January 5, that  was free of other engagements.

The theme of Cowboys and Indians inspired the t-shirt design, dreamed up by another student council representative, senior Sarah Norris, as well as the hilarious morning show commercial featuring a showdown between the junior Indians and the senior Cowboys.

And a showdown it was.  The two teams practiced during the last week of Christmas break. Jesuit students volunteered as coaches  and referees for each team.  The boys assigned positions, created plays, and explained the deeper secrets of flag football.

When the big day rolled around, the Indians chanted and the Cowboys wielded their water guns, as team members spatted up and painted up. By seven o’ clock, the teams stood ready.

The girls found one downside to playing football on a legitimate football field is the pain that the Astroturf adds to every fall. All players agreed that the game was brutal. Hilarious, incredible, but brutal. The young ladies that an Academy student sees every day at school were transformed into driven athletes. It was obvious that both teams wanted to win.

Gracing the half-time show were the talented Academy Dance Team who had developed a new choreography to commemorate the occasion. Even with the prediction of rain, Academy students showed up to support their favorite team.

The senior Cowboys rightfully beat the junior Indians with a score of 23 to 7. The following day at school buzzed with talk of the previous night. Girls showed off scrapes that travelled up and down their legs and arms. They took pride in their scratches as they revealed a deeper pride for their grade level.

“I had an absolute blast at this event, and I am really going to miss it next year,”  said Martin.

When asked about his reactions to the game, Jesuit Student Council President and coach for Powder Puff,  Travis Allen said simply, “Seniors rule!”