‘When you were 17’: Teacher Edition 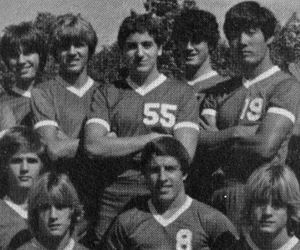 We have all wondered what our teachers were like in high school and now is the time to find out. This past week Mrs. Beth Chase, Mrs. Jenny Van Pelt, Mrs. Judith Perrella, Mr. Motta, and Mrs. Edie LeBas shared what they were doing when they were 17 and seniors in high school.

Who would have thought that Mrs. LeBas wore penny loafers just as we do, that Mrs. Chase and Mr. Motta had the first calculator that only did the simple things (not like ours today where we can play games), that Mrs. Perrella grew up during the time women were not treated equal to men, and that Mrs. VP sat in the same senior lounge when she was 17!  What would you say you did when you were 17?

Q: What high school did you go to?

Q: Where did you live?

Q: What activities were you involved in?

Mrs. Chase: I had a job at a local movie theater as the head candy girl because I had to pay for high school.

Mrs. Perrella: Since girls were not allowed to be on sports team,  I was on the drill team that marched with the band.

Mr. Motta: Soccer,  and I would go skiing on Monday nights during the winter

Q: What was your favorite TV show?

Q: What was your favorite song?

Mrs. VP: Anything by John Denver

Mrs. LeBas: “Come Go with Me” by the Dell-Vikings

Q: Who was your role model?

Mrs. LeBas: Audrey Hepburn- I wore my hair just like hers,  and I had big sunglasses and the same trench coat she wore in Breakfast at Tiffany’s.

Q: Did you have any type of electronics?

Mrs. Chase: I had the very first calculator- all it could do was add, subtract, multiply, and divide. I also had my own phone line in my bedroom because my mom worked for the telephone company.

Mrs. Perrella: I didn’t have any, but my father had a calculator that could only add, subtract, multiply, and divide which was $350 at the time.

Mr. Motta: I also had a calculator that could only do add, subtract, multiply, and divide.

Mrs. LeBas: Not in the 60s – I had a dial phone with a very long cord that could reach from our hall into my bedroom – I was always on this! I also had a typewriter that was non-electric for which I had to use correction tape.

Mrs. Chase: No, my parents drove

Mrs. VP: Yes, I shared my mom’s car with my twin brother

Mrs. Perrella: I had a Morris Minor in Chamberlin’s school colors which was very cool at the time. On the car I had a Chief’s hood ornament.

Mr. Motta: I had an Alfa Romea, a sedan.

Mrs. LeBas: White Chevy Impala hardtop – that was the family’s car to share.

Q: What was in style?

Mrs. Perrella: We only wore skirts and dresses because slacks were not allowed on women until the 70s.

Q: Did you ever get in trouble with your parents?

Mrs. Chase: NO! I was afraid of my parents. Fear is good.

Mrs. VP: Yes, but my twin brother was worse so not really

Mrs. Perrella: Yes, I was grounded once because I was out with a group of friends and I didn’t call my parents and tell them where I was. This only happened because we were caught in a rainstorm and since we didn’t have cell phones back then I couldn’t call my parents.

Mrs. LeBas: My dad died when I was ten, so my mom taught (Senior English no less!) at the high school where I went so it was hard getting away with things.

Q: What was your curfew?

Mrs. Chase: 11, and if I didn’t make curfew my farther would lock the front door so that I would have to knock on the door for him to let me in

Mrs. LeBas: Midnight on weekends and 10 on week nights.

Q: Any trouble with the law?

Mrs. LeBas: Are you kidding? That would have been a major scandal in South Jacksonville!

Q: Most memorable thing you did?

Mrs. Chase: Some of the people in my class glued the principal’s door shut while he was in it and told him that if he wanted to get out he had to jump through the window! (She claims she had nothing to do with this prank)

Mrs. VP: My cousin and I went to school, AHN, with our hair in pigtails and bright red lipstick. Once we got to class,  a Sister marched us to the bathroom and told us that we had to take it off right away!

Mrs. Perrella: I had an exchange student sister from Germany that year.

Mrs. LeBas: In mid-October, 1962, my best friend and I set out to drive to the Naval Air Station to borrow some parachutes to decorate our gym for the big homecoming dance that weekend. When we got there, the base sentries were turning away all incoming cars and told us the base was off-limits. Because the news was kept secret from the press, we did not know until later that weekend that our country came very close to a deadly strike from Russian missiles set up in Cuba and aimed at our shores.