For seniors in Japan’s tsunami zone, a full circle of hardship 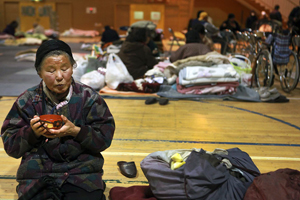 MIYAKO, Japan — Chiya Yamane shuffles down the hall of the evacuation center, an old lady seeking refuge in a children’s school.

She is wearing an oversized sweater, her shoulders hunched against the late winter chill that penetrates the Miyako Elementary School where she was brought after the March 11 tsunami tore through her home. She remembers hearing the tsunami warning; then the desperate attempt to get away.

It was a rescue worker who appeared in time to carry her on his back, up the mountainside to higher ground and safety. “A great, great blessing,” she says, though she knows, too, that being saved meant her ordeal was just beginning.

Japan is an aging society, a country characterized by a low birthrate and long life spans. More than one in five Japanese is over 65 — roughly double U.S. levels — with the ratio closer to one in three in rural areas.

But if those statistics dictate that a high number of the dead from this tragedy must be elderly, so, too, must be the survivors, now struggling to get essential medicines, stay warm against the cold, find their pets and salvage waterlogged mementos.

Japanese soldiers found 128 elderly people abandoned by medical staff at a hospital six miles from the stricken Fukushima nuclear plant. Most were comatose and 14 died shortly after.

Eleven more reportedly froze to death at a retirement home in Kesennuma six days after several dozen of their fellow residents were killed by the tsunami. Morimitsu Inawashida, the facility’s owner, characterized those who survived as “highly stressed.”

Nowhere is Japan aging more visibly than in the rural, northern prefectures struck by the quake. This part of the country is characterized by towns and villages now the preserve of the elderly, many of their children gone to live and work in Tokyo and other big cities, leaving them without the family support that was an anchor of traditional Japanese society.

“I’ve lived here 60 years and you’re seeing fewer families all living together,” said Yamane, whose son lives in Tokyo and whose married daughter works several miles away. “And without jobs, more young people are moving away.”

Even farming has become an elderly profession in many cases. Yaegashi Takashi, 74, said his house had survived the quake and its aftermath, but his tractor was lost, a huge blow. He only heard from his children, living in Tokyo, a week after the earthquake.

“They were worried about me,” he said. “Without my tractor, I can’t farm. There’s no insurance for it.”

In the absence of sons and daughters, much of the care has been meted out to caregivers outside the family who themselves are getting on in years, a phenomenon known as rorokaigo.

Evidence of this senior tragedy could be seen in those who had retreated to the Miyako school where Yamane sought shelter. More than half appeared to be in the 60s-to-80s range. This is a generation that grew up in the devastation of postwar Japan, saw the country modernize into a place synonymous with high-tech comfort and now see their lives bookended by disaster.

“I can’t really compare this to World War II,” said Kiyoshi Kikuchi, 80. “Both are hard times, but I never saw my house so damaged like this during the war.”

Until a few years ago, Kikuchi was a community safety official responsible for looking out for his elderly neighbors. Now he stood outside his family-run shoe store using a flat shovel to scrape mud off a glass door that had been pulled from its hinges.

“This work is very hard,” he said, wearing a white towel around his neck while shifting broken furniture. “My son moved away. Women can’t do it. So it’s up to me.”

There is much talk here of the toughness of the older generation. Having spent a childhood amid postwar deprivation, they see themselves as resilient, self-sufficient, not soft like today’s youth with their electronic gadgets.

But Japan’s elderly are catered to as well. Electronics companies are developing robots that talk to and do chores for them, including Riba, an electronic nurse that lifts people out of bed. Car companies have crafted large-print dashboards and easy-exit swivel seats, while toilet-maker Toto is working on medical commodes that transmit daily urine and stool analysis data from isolated communities to distant medical centers. A tea kettle with wireless technology can warn distant offspring if a parent doesn’t use it every morning, a warning to call in.

And yet there are signs of strength. Many of the elderly leave shelters during the day to clean and search for precious items, returning to the evacuation centers at night. Most houses that are still standing have a pile of possessions out front, seen in Japan not as an invitation to steal but a pragmatic way to start digging out. Bulldozers have pushed debris into the side streets to clear the main avenues, leaving piles up to 10 feet high. Between them, in the ruins, elderly women can be seen pushing shopping carts with a few possessions.

The loss of personal treasures is keenly felt. Miura Masao, 75, a painter and owner of the Art Space M gallery in Miyako, stood in a mess of ruined paintings of landscape scenes, though some hung just above the 5-foot high-water mark, high enough to survive unscathed.

“Everyone in the family is fine, but perhaps most difficult for me is the loss of all the photos, mementos, memories,” she said. “Everything’s ruined. And when I saw my studio, I was panicked. I still don’t know how many paintings have been lost.”

Seventy-four-year-old Chieko Yamanaka said she missed the comfort of a bath.

But the closer to the radiation-spewing Fukushima nuclear reactors, the worse the troubles got.

The nation got a glimpse of the severity when Yoshimitsu Inomata, head of Aozorakai Omachi Hospital 16 miles from the nuclear complex, told the national TV network that most of the staff had fled, there was no medicine or IV drips left, and little food remained. Many of the elderly patients are unable to digest emergency rations of canned bread, he said. And no one wanted to enter the radiation-affected zone to help.

“It’s a nightmare,” Inomata said. “We don’t even need people with special skills. Anyone who can get here and serve food or change a diaper would be great.”

The patients were later evacuated.

Now the elderly contemplate their future. Yamane worried about her 86-year-old husband, who is in a wheelchair and staying at a nearby care home. There was joy this day that someone had been able to replace his medicine that had been swept away by the water.

But there was melancholy too, as Yamane fingered a pair of mud-caked reading glasses in a plastic bag that her daughter had retrieved from the debris of their home. Yamane has returned to see the house as well.

“I’m so shocked and stressed to see the house,” she said. “Everything becomes more difficult when you get old.

“On the other hand, if you look around at all the suffering, you’ll find there’s always someone worse off.”